We had a real nice 8 day visit with our family from Korea and they are back there now after a 23 hour door-to-door trip that began yesterday at O-dark-thirty, as our military son often says. As long as the trip is, I think it's amazing that we can go half way round the world in less than a day - compare that to 100 years ago. Since their daughter, Alex, is spending this year with us, there were lots of seperation tears at the airport - they are due to come back to the states next summer after their 3 year tour of duty. Following is another meal we made for them.

Many years ago, Bev decided to try a quiche recipe that was advertised as a favorite of President Kennedy - we both loved it and have made it several times. Since our daughter-in-law has previously said she liked it, we made it for breakfast while they were here for the holidays. Bev got everything ready the day before so all I had to do was mix with the eggs and cream and bake it up. As I recall, it always takes longer than the recipe says.

It’s easy and delicious and I highly recommend it – here’s the recipe, but make sure you’re using a big pie crust – or have a couple of ramekins handy for the extra.

I had posted awhile back about an Italian fatty I’d made and we decided to serve it with the quiche. Here’s a picture of the reheated fatty and my son’s plate. 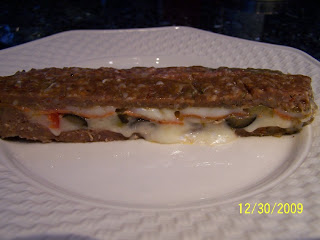 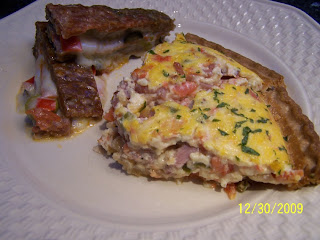 Have a great day