You may know that I try to post sometheng everyday - whether or not I have something worthwhile to say :). So if you missed me yesterday, it was because we were without power all day - seems as though that's typical for every significant weather event, part of living out in the country I guess. So with the impending storm and in trying to be prepared, on Friday, I filled four large pots with drinking water and two buckets and a large bathtub full for other uses - flushing the toilet for example. This is not my first rodeo and I'm glad I did this as it was nice to have water and by laying in a good supply of firewood for the fireplace, I was able to keep the house from freezing up - and since our cooktop is gas we were still able to make up a big pot of chili. I sure realize our little minor inconvenience is nothing beside what many are experiencing.

With the prediction of major snow - I had to send the following email to my son who has small kids - "Hey Guys - In looking at the weather forecast, it looks like you may get 6-12 inches of snow Fri & Sat. I know you'll be getting lots of advice from co-workers and the TV and growing up in Illinois, Ann is snow competent, but having grown up in snow country, I believe it's important I give you one critical piece of advice - be sure the kids sleds are slicked up and ready to go. Love Dad"

And now for what I'd planned to post before the weather issues.

Eating out twice within a week, or even a month, is almost unheard of for me, but it just happened. Alex had to go to the orthodontist in Knoxville on Wednesday and I agreed to go along in an effort to get out and about more. We went to Sam’s and I bought a little meat to smoke then we went out for a mid afternoon dinner. The one place I know of in the area that serves what seems to be real Cajun food is Bayou Bay in South Knoxville – I’ve never been to Louisiana to enjoy Cajun/Creole cooking. According to the waitress, the owner is from Louisiana and this is the same food he would serve there plus it was a favorite haunt of Louisiana boy, Peyton Manning, when he was playing football at UT.

They have a wide selection of fried and broiled dishes, but I decided to go for a classic – crawfish etouffee, while Bev had fried oyster and fried shrimp appetizers. I’m far from an expert, but I think this was pretty good stuff, at least I enjoyed it, and it was way better than the dish I’d made at home using etouffee from a jar. Next time it will be jambalaya for me. Here’s a shot of my dish – I forgot until after I’d eaten several bites. 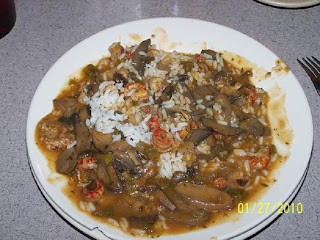 Since the restaurant is about 40 miles from home, I’d probably not make a special trip for Cajun food, but I look forward to the next time we’re nearby.

Alex, fresh from the orthodontist and in pain, ordered sauteed grouper and it came smothered in mushrooms. She couldn't eat anything so we took her's home and she ate the fish after taking some Tylenol, but the mushrooms remainded. I didn't take a pic, but they made a fantastic scrambled egg dish Thursday for breakfast. Bev didn't try them - she wasn't into fishy mushrooms.

Whoops, maybe it's not spring afterall, the daffodills in the title picture are peaking out through an inch or so of snow this morning, and it's 20*.

Enjoy the rest of your weekend and stay warm.