Since I've had several posts waiting, I can do more than one topic in a post, so this one contains two. In my Jan 1 post, I’d mentioned that in addition to our holiday meal rib roast, I’d also smoked a turkey breast on Dec 30. Normally, I smoke turkeys at a higher temperature than beef, but this one was cooked just like the roast, which meant around 225* for about 4 ½ hours. I pulled it at an internal temperature of 160*, immediately wrapped in foil and stuck it in a cooler for a few hours – then cooled it and put in the frig. The higher temp cooking is done, in part to achieve a crispy skin.

We finally got around to trying the turkey on New Years day and it was my best ever. I cooked it skin side down to allow the flavors and juices from the cavity to permeate the meat and while the skin was tough and rubbery, the meat was tender, juicy and full of flavor – I don’t eat the skin anyway. Many years ago, I’d smoked a turkey on my first cooker which was a Brinkman vertical water pan smoker and after 10 hours, it came out very moist and tender and the dark meat was more pink than brown. Over the years, I’d gotten away from the lower temp cooking, but after this one, I’m definitely going back and when I want a crispy skin, I can stick it in a hot oven for a few minutes – this way I’ll get the best of both worlds.

Having said all that, let me tell what we did with it. I’m not really a big fan of plain roasted turkey, smoked or otherwise, but I love turkey salad and other turkey dishes. This breast was smoked primarily to make into Kentucky Hot Browns, which I’d seen on a Bobby Flay Throwdown, Fat Johnnie's Front Porch, and Nibble Me This a while back and have been wanting to try. Chris’s post includes a history of the sandwich. I used the basic recipe from Louisville’s Brown Hotel but altered the assembly a little based on those the other two guys made and Bevs opinion. We like to get some of every ingredient in every bite and have it be easy to eat – especially for the MIL. So our primary deviation was to chop the tomatoes and bacon and sprinkle them on top of the mornay sauce prior to broiling.

The last time we put a ceramic dish under the broiler, it broke in half and the only other thing we could think to use was our cast iron sizzling plates (normally for steaks and fajitas) and they worked great – pre-warmed them a little before building the sandwich. 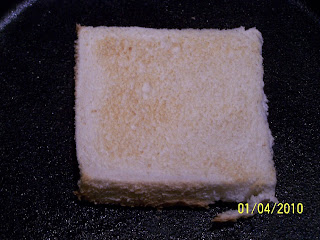 Then two layers of pre-warmed turkey. 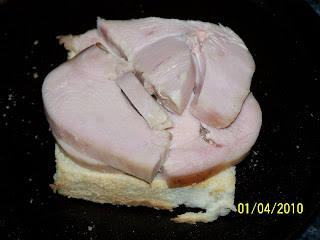 The Mornay Sauce - almost a cup per sandwich. 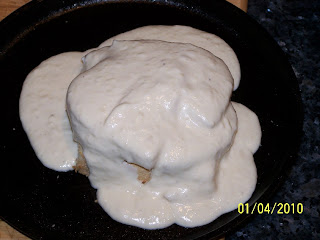 Then the tomato and bacon. 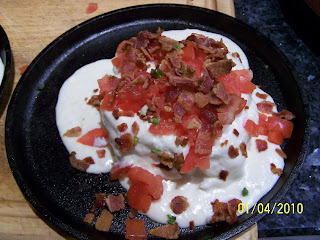 And the finished dish with a little chopped parsley added. 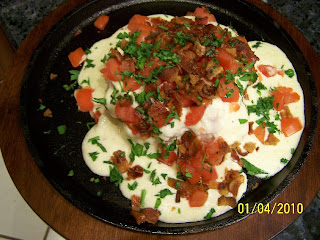 The four of us who ate it thought it was delicious and something we definitely will have again. I'd smoke another turkey breast just for this dish - although I'm not sure I could tell it was smoked with all the other flavors.

We couldn't remember making a Mornay sauce before, but all agreed that if we tossed in a little garlic and the extra chopped parsley, we'd be ready for an excellent pasta sauce. I did a little web surfing and as best I can determine, the primary difference between Alfredo and Mornay sauce is Alfredo is butter and cheese (parmesan)and Mornay is flour, cream and cheese (usually guyere).