I put several posts in my queue during the holidays, so some of these are a little dated. If you follow my blog, you know we had chicken and dumplings for dinner last Monday night and while we ate all but a few dumplings, there was quite a bit of chicken and gravy remaining. One option would have been to just make more dumplings, but we decided to use it for a batch of pot pie instead – using the semi-homemade cooking style. Bev added some frozen veggies to the leftover gravy and heated through. We then poured the mixture into a casserole dish, topped with frozen biscuits and baked until they were golden brown. It turned really good, but I think it created more leftovers to deal with than we had to start. Here’s a pic of the whole dish and Bev’s bowl – I normally use my plate but I like to flip my biscuit upside down with the gravy on top and it doesn’t make as pretty a picture. My make it a little runny to have gravy to be soaked up by the biscuit. 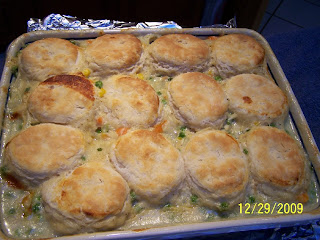 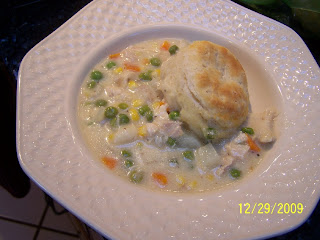 I finally ate up the last of it Sat night for dinner.

It's a balmy 10 degrees to start the day here at Almost Heaven South - a great one.