Breakfast On A Bun

This post has been in the queue for a few days and covers two meals, but I think it still ok.

Bev got up, said she didn’t feel well, and went back to bed, so I knew I was on my own for breakfast today. I thought about it for a while and decided the number one criteria for the meal was utilizing one of her homemade burger buns and my first thought was a scrambled egg and sausage sandwich – but I was sure we had no sausage. So I went refrigerator diving and discovered a nice slice of ham left from a meal the other day, so it became a ham and fried egg sandwich with Cabot sharp cheddar and mayo. I tossed the ham in the skillet to warm up and in the same skillet I fried two eggs (they were small and it’s a big bun)– I broke the yokes so they would harden. Here they are before and after flipping. 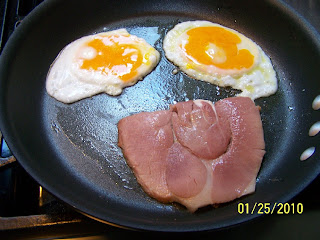 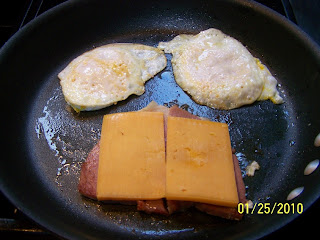 The finished sandwich – have I said I like the meat to overhang the bread? 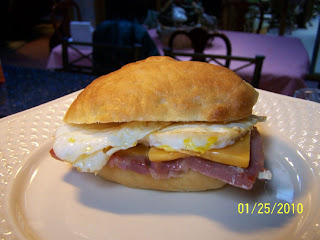 It was very good, but the addition of a little chopped onion would have made it outstanding – assuming of course you like onion. I’m not sure granddaughter Alex would have admitted it, but this was definitely better than McDonalds. Since it was the normal bread recipe, I knew the bun would taste good, but I liked that it held together much better than store bought – maybe Bev will make this a regular feature on bread day. I followed it up with a glass of homemade mater juice – best thing in the world to wash down big pills. You may know this, but I love breakfast food.

It's now a day later and I just decided to tack this on to the above. Bev feels better, but had to leave early to be with her mom who's in the hospital having some tests run. As a result, I'm alone for breakfast again and again thought in terms of scrambled eggs with some leftover port loin chopped up in them on another bun. When I dug in the frig to find the meat to what did my wondering eyes did appear but a bun sized piece of leftover smoked pizza fatty. I'd struck the mother lode and quickly stuck it in the mirco for a quick warm up. It was probably a little past it's expiration date, but I couldn't pass it up. Here's the result and boy was it good. 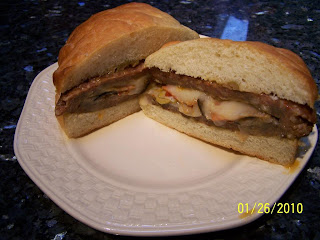 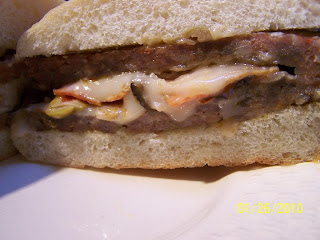 The title photo is Kitty, the resident mouser. She just came by for me to provide her morning head scratching. I just scratch and she moves her head around to the right place.