Earlier I had posted about the Sous Vide gadget that I got for Christmas and it's first use on tuna and now it was time to give beef a try.  Coming off my five day fast, I wasn’t ready to try steak yet, but Bev had a nice looking NY strip she wanted to cook and I wanted to try out sous vide on it.  She likes her steak to be between medium rare and medium so I set the water temp at 135F, based on the various meat charts.

Rather than using a vacuum bag, the instructions say an ordinary plastic bag can be used so long as it sunk such that all of the air is removed, which is what I did. 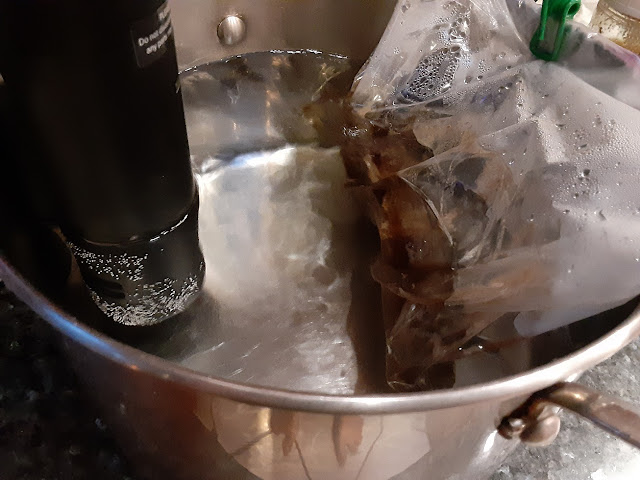 When it came out of the bag after about 4¼ hours, it was at 134F internal temperature but I was very surprise at the amount of liquid remaining in the bag as I expected none so I dried it with paper towel and seasoned with Montreal Steak seasoning. 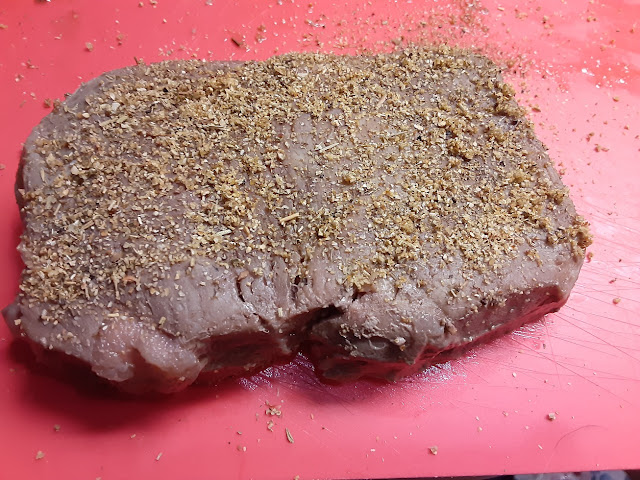 I lightly coated a cast iron skillet with peanut oil and when it began to smoke I added the steak and seared it for 75 seconds on each side which made a nice crust as can be seen it the pan. 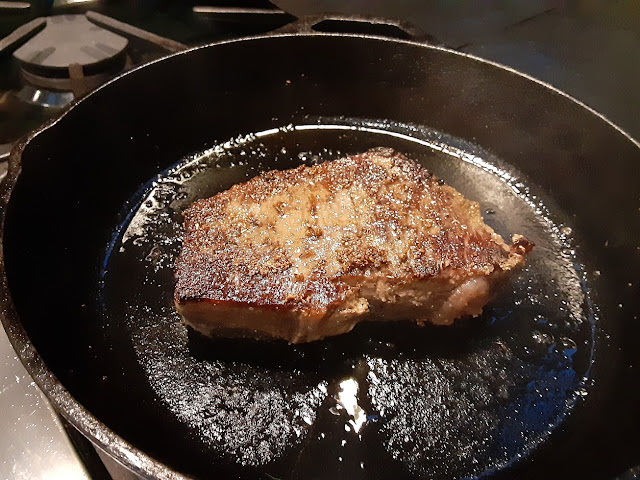 When I cut into it, I was surprised at the doneness level for 135F as it was totally pink and I was expecting redder - it was a little more pink than in the shot. 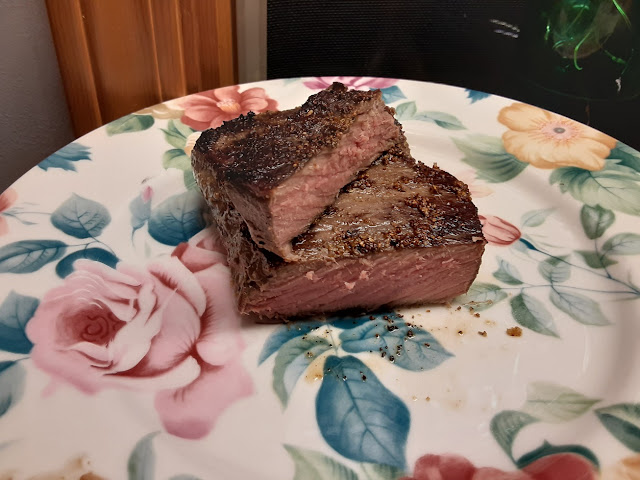 However, the main objective was achieved as the doneness was the same from edge to edge with very little well done around the edge as when cooked with a more traditional method. 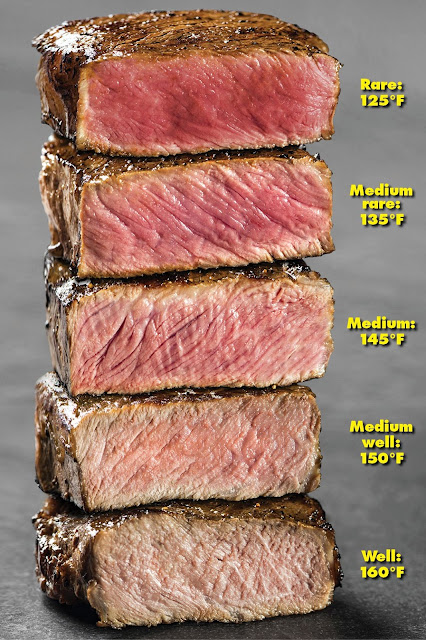 Many of the charts list 135F at medium rare and mine was well past that but I forgot to check the temp after searing but can’t imagine it went up more than a degree or two.  I think the above chart temps are still too high - 125F will not be a cool red center for rare - I believe the top steak is medium rare - warm red center.

It was tender and had a good flavor but I was very disappointed in the texture as it was more dry than I thought it should be, which explains the juices left in the bag.

So am I tossing the machine – absolutely not as I will continue experimenting by using a vacuum bag next time and only cooking to 130F.

Our meal-on wheels entrée for this week was Chicken Parmesan with spaghetti and homemade bread and I used the recipe from Café Delights as my starting place.  I generally followed the ingredients list, except I used Ragu for the sauce and I used a different chicken prep and marinating method.  Please stop by Karina’s site for the original recipe and delicious looking shots. 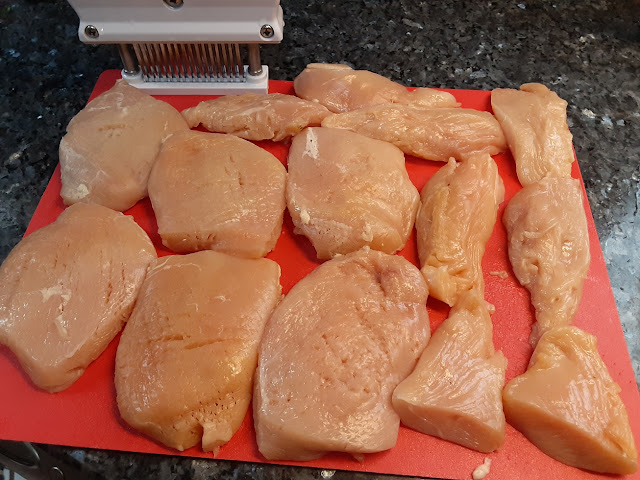 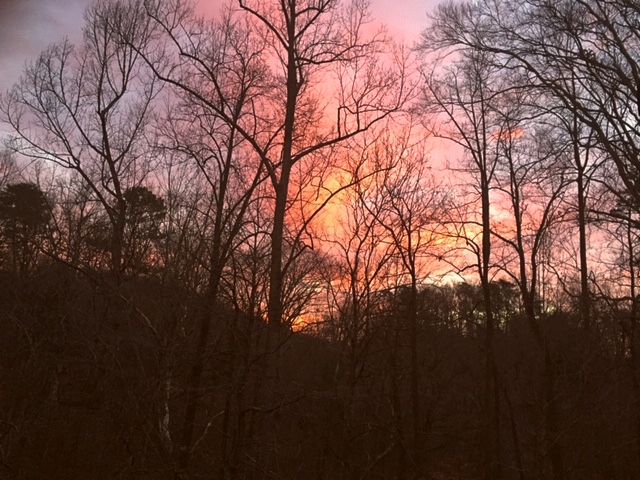 In support of my weight loss efforts, for some suppers, I eat only a vegetable such as broccoli or Brussels sprouts and for this meal I chose cauliflower.  I decided to use a recipe from Chef Lea Ann which I got a while back and thought that I’d blogged about but could not find so here it is (again).  Check out Lea Ann’s blog for her original recipe that looks like this. 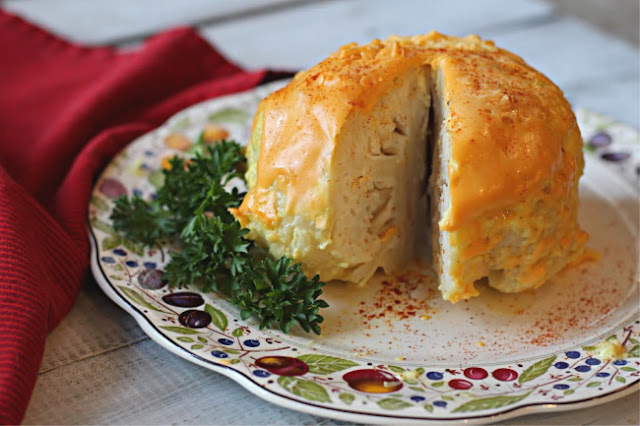 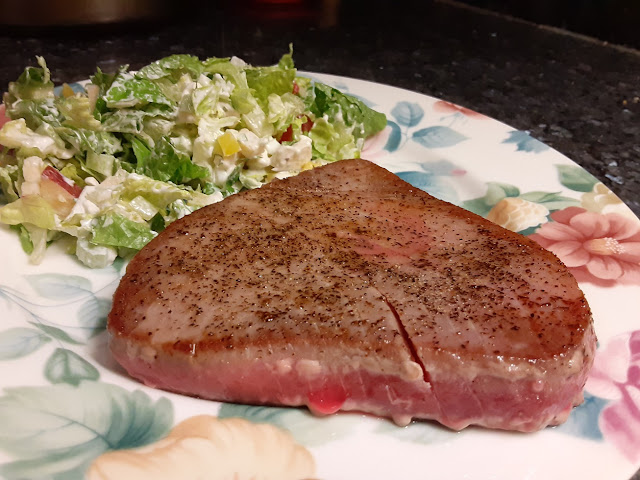 Continuing with my weight-loss, low-carb, Blue Zone, and around-the-world meals, I made up a pot of Greek Lentil Soup using the recipe from Sarah and Tim on their Curious Cuisiniere blog as it seemed to have the right stuff in it.  Since I had 2 cups of lentils, I adjusted their recipe to get the one below with a couple of other revisions.  Check out their blog for the original recipe and more shots like this. 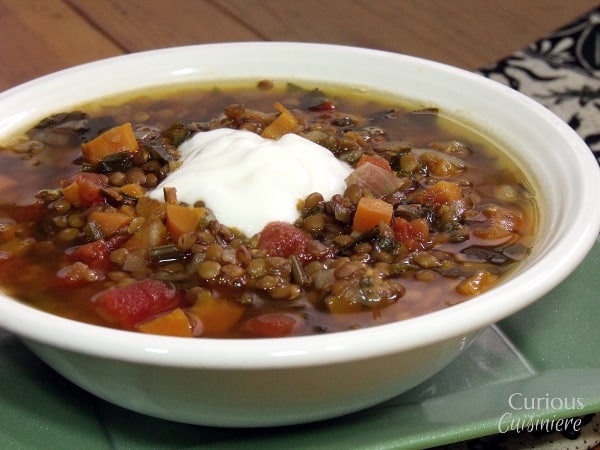 Labels: Around the world, Soup

In the South, the traditional New Year's meal for good fortune includes black eyed peas, pork, collard greens, and cornbread.  We chose to forego the collards as I’ve never been able to make any that I liked so we just went with the other three.

Hoppin Johns seem to have originated in the South Carolina Low Country when rice was cooked with black eyed peas and for our meal, we used a recipe that we have made before except I used Kentucky Legends Ham rather than andouille to keep the heat level down. 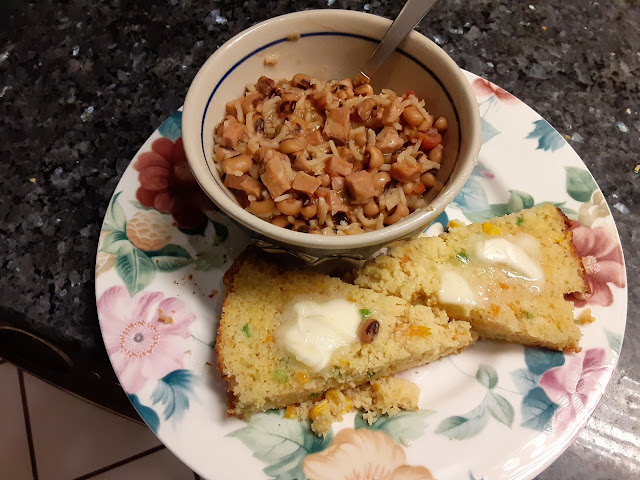 I emerged from my doctor visit on Dec. 19 with a surgery date to replace my left hip and a weight that I needed to achieve.  I was pretty disappointed when I left as I was planning to be at the goal weight (47 lb. loss) by Jan 3 with a hoped-for surgery date in mid-January.  As it turned out the doctor was going to be doing medical mission work most of the month (good on him) and he added 10 pounds to the weight loss goal.  Me at my worst last winter in Tombstone, AZ 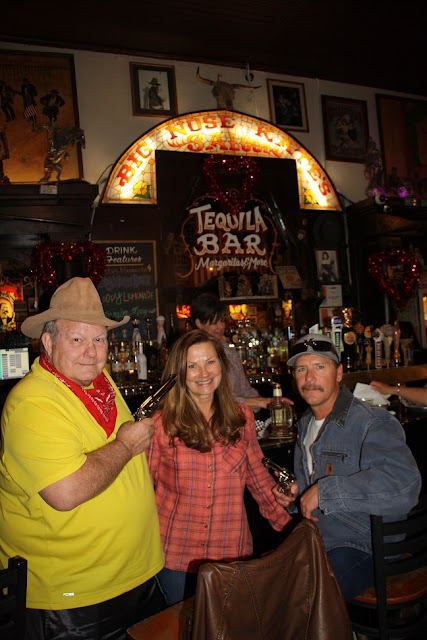 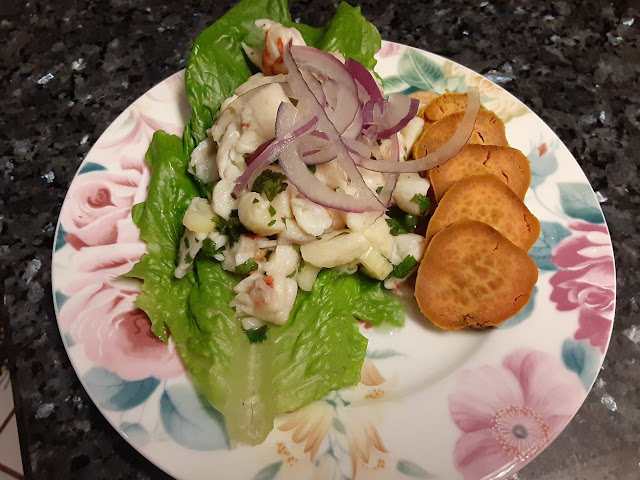 Christmas Dinner With Our Friends – Desserts and Presents

My pretty wife sported her elf outfit for Christmas day - rather than making me a gift, I'd just take I'd take her home as my gift any time. 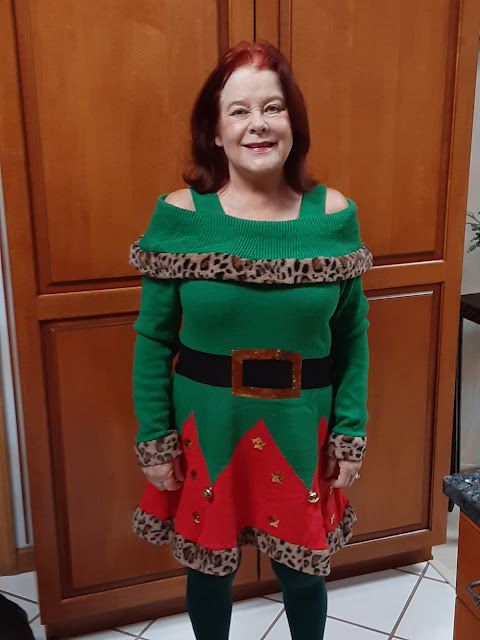