I know I’ve mentioned this, but the town where I grew up in Northern WV has a large Italian population. When my parents visited with their friends, my sister and I always were taken along and many of their friends were Italian. Frequently the grandmother lived with them and spoke only broken English, so needless to say, when it comes to Italian food, I was exposed to the real stuff, especially around the holidays. I say all of this to say that after growing up on the real stuff, I’m picky (more like I’m a snob) about going to an Italian restaurant – I don’t do Olive Garden or any other chain – have tried several though.

So we were talking with a friend the other day and the conversation got around to Italian restaurants and I said the closest to the real thing I’ve had in this area was at Naples in Knoxville, although I hadn’t eaten there in at least 15 years – but it’s still the family owned place it has been since 1955 – three different families, but the current owner has had it since 1981. We don’t eat out often, but when we do, rather than pick a restaurant then decide what cuisine to eat, I pick the cuisine I want to eat, then go to the place that does it best. So I don’t go to a seafood restaurant and order steak or spaghetti.

I’m somewhat of a purist and for me it’s all about the sauce (similar to the hot dog I posted about on Jan 19) and I prefer fresh tossed dishes to baked ones, although I love them too. The salad dressing and bread are also an important part of the meal. I had done a little website research on Naples, in the afternoon, to read up on their history. While there, I checked out the menu and knew what I was going to order when I walked in the door – unless they had a special that trumped my choice. After ordering they brought us a small flattened loaf of warm bread – looked like a large square hamburger bun, with herb butter. I really liked the butter and the bread was good, but clearly not the crusty Italian version I grew up with. My salad was a garden salad with house Italian dressing (creamy Italian) and it was large with lots of crispy vegetables and while the dressing was good, it was pretty mild (not real tangy).

The entrée I selected was Pasta Supremo – “Pepperoni, sausage, meatballs, green pepper, onion and pimentos sautéed in a hearty tomato sauce and served over today's fresh pasta.” I was expecting a pretty big bed of spaghetti, topped with a few pieces of vegetables and meat and topped with tomato sauce. What I got was a small bed of wide egg noodles (I guess the pasta of the day) with lots of meat and vegetables in the sauce on top – just like the menu description. I thoroughly enjoyed it, thought the sauce, meatballs, and sausage were all very good and a wide noodle, which I like, is still pasta (looking closly at the pic, it appears the pasta has herbs or something made into it). 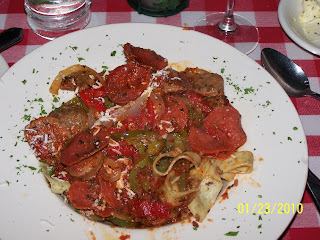 In summary, I still think it’s the closest to the real thing I’ve had in this area even though the bread and salad were more for the East Tennessee taste – I guess they want to stay in business. I will definitely go back and not wait 15 more years to do it. The one chain I’ve not tried, and many folks rave about, is Carrabba’s which will be my next Italian restaurant meal.