The prime rib we had for our holiday meal was outstanding, but alas, what to do with the leftovers - I believe an open faced sandwich will work well. We actually ate this meal on Jan 2.

I trimmed and sliced the roast while still cold to make it easier to slice thin. I then stacked up the slices, wrapped in plastic and allowed it to come to room temperature for about 90 minutes. An hour before dinner, I wrapped it in foil and warmed in a 250* oven to a 120* internal temp – just stuck a remote probe down in the middle of the stack. I put the leftover au jus in a large skillet and brought it to a simmer and dunked the beef slices in it for a few seconds (sucked the pink color out of it as expected) then on to the thick sliced homemade bread (lightly toasted) and topped with a little more au jus. 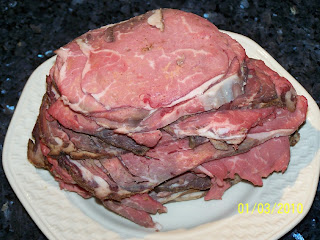 During a trip to visit with our son in Harrogate, Tn early last month we got takeout from a local BBQ joint and while the meat was nothing special, they had a potato salad made with sour cream, bacon and green onions that we really liked. I did a little web surfing and came up with a recipe that was made with both sour cream and mayo (which their’s had and I wanted), so Bev whipped up a batch to go with our prime rib. It is called Loaded Baked Potato Salad and it was very good warm and at room temperature, except we didn’t bake it per the recipe but rather just mixed all the ingredients like normal potato salad. I tried it cold for lunch the next day and while still tasty, I prefer it warm best. A different kind of potato salad worth giving a try. 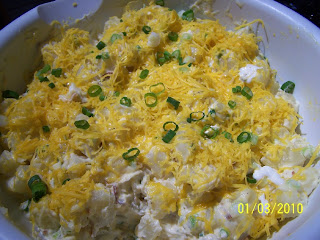 We also some horseradish sauce made from this recipe which I also liked.

It was a great way to polish off the leftover meat. Here’s a pic of my plate 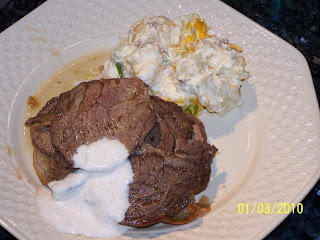