Tuesday I posted about cutting up a whole boneless rib eye and part of the process was to cut off some thin slices for cheese steak sandwiches. Here’s a picture of the pile of meat - I had 2 3/4 pounds for 5 sandwiches (about 9 oz per which was about right for the bun size. 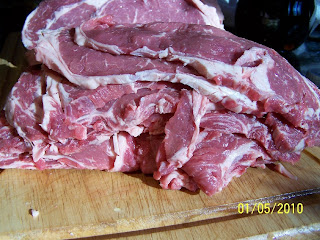 The kitchen got all spit-shinned today and I didn’t want to trash it cooking, so I used the grill. We have a two-burner griddle for the stove so I just used it on the grill. I put 3 of the 5 burners on high and pretended I was at the stove, except it was about 40 degrees cooler outside – perfect weather for being up close to a hot grill. Here’s some pics of the cooking process and as I got some done I just moved it over to the warming pan. I’m finding ever more uses for the grill for when I want to keep the inside cook top clean. I also cooked the onions and peppers on the grill side burner for the same reason – I may keep this grill (I think I’ve had it for more than 5 years). Here's the onions and peppers - I used one small onion per sandwich and a quart and a half bag of frozen peppers from last summers garden. 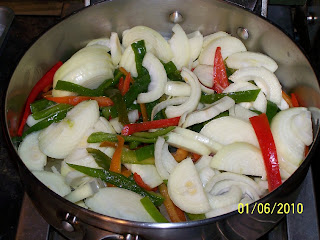 The meat cooking on the griddle - it took 2 batches. 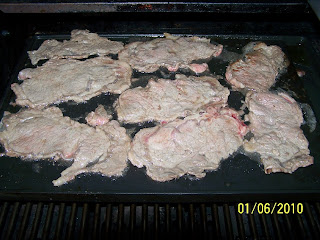 When it was browned on both sides, I stacked it up and cut into 1/2" wide pieces. 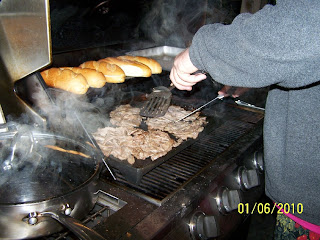 After I got all of the meat cut up, I put it into piles on the griddle for each sandwich and topped with a couple of slices of smoked provolone cheese to melt into the meat – I know, I know at Pat’s and Geno’s they use white American and Cheese Whiz, but in South Jersey, where I was introduced to the sandwich, it was provolone. 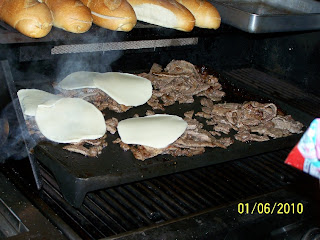 One sandwich being prepared - I'd pre-sliced the buns and had them on the warming rack for most of the cooking process - which made them a little too crusty. 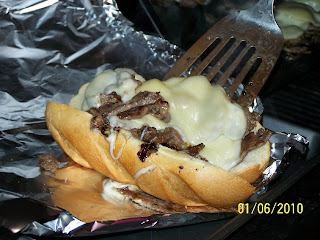 The tray of sandwiches is headed for the table. 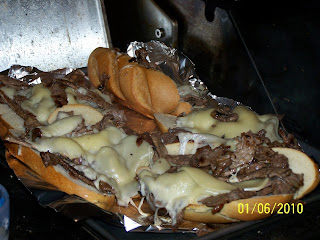 My sandwich was so full I spread the meat and veggies over the bread more evenly than shown in the picture and ate it open faced with a knife and fork - it was tooooo good. 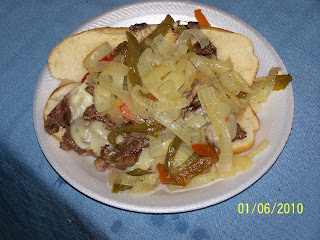 We used to make these from Steakums and thought they were good, but after discovering the places in Philly use rib eye, we have seen the light and they are definately better with just a little more effort.

A little snow predicted here today - I hope we get enough to make it pretty. I know many of you are really tired of the white stuff by now. Have a great day.