We have developed a liking for swordfish but it is not readily available around these parts so I bought some from Joe Patti’s Seafood (wholesale to the general public) in Pensacola, FL.  While it cost a lot to get it here, the price from them is not much more than buying seafood locally.

We had made Swordfish Puttanesca about 15 months ago but for todays dish we went back to a 2014 recipe to re-try Sicilian Swordfish, which is similar but different.  The main reason for the redo is to get the cooking times recorded.

My last post was about the beef shanks we had gotten from our neighbors and I also mentioned that we got several packages of neck bones.  Not to let them go to waste, we cooked the neck bones in water overnight to get as much flavor from them as possible for broth and we got four very rich quarts - likely eight quarts of the store bought stuff.  As it turned out, we also got a couple cups of very tender meat from the bones and decided to make something for ourselves rather than give it to the dogs. 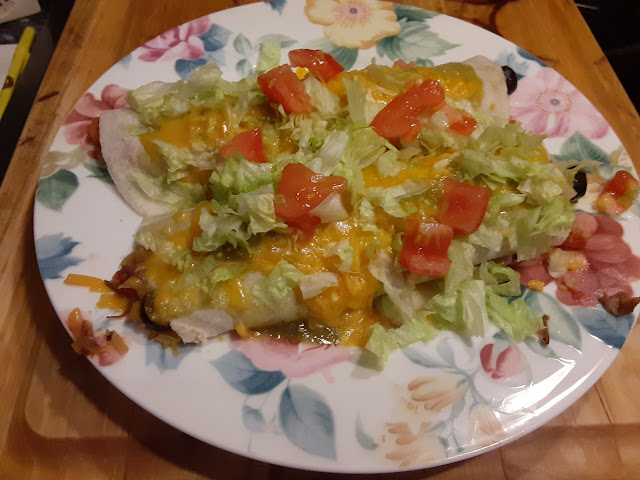 Our neighbors, who raise beef cattle, were cleaning out their freezer getting ready for their new beef and they brought us several packages labeled soup bones.  As it turned out there were some neck bone packages but more than half of them were beef shanks (the leg bone with meat attached).  So we made some rich beef broth from the neck bones and used the shanks to make Emeril’s recipe for Braised Beef Shanks.

Since his recipe used four shanks and I had 11, I changed the ingredients to get what is shown below and while he cooked his entire meal in one pot on the cooktop, I did the braising in the oven in a large pan so my instructions are very different.  Emeril’s original recipe can be found by clicking on the link above.

The first thing I did was to see if the meat would all fit into my pan. 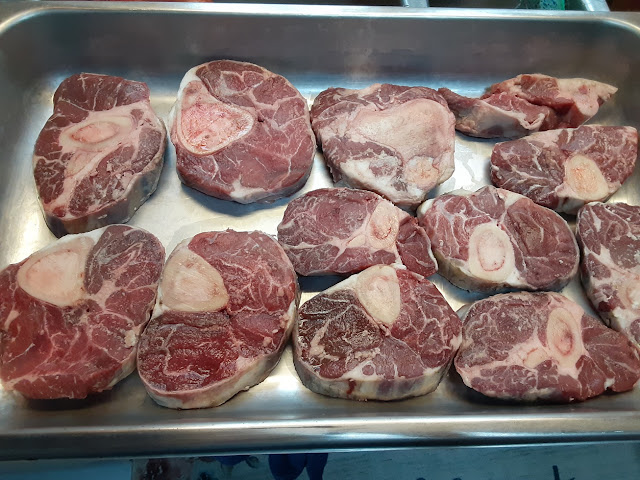 I find it interesting how recipes often just show up at the right time as happened for this meal.  Within a couple of days of Bev saying she would like pork piccata, Tricia posted a recipe for Chicken Piccata on her Saving Room For Dessert blog.  After reading it, I decided it would work just fine for the pork so I followed the recipe as written except for the meat and lemon zest (I had squeezed all of our lemons a few days before).  Check out Tricia’s site for the original chicken recipe and more pics like this one.

Since stumbling into them many years ago in Miami’s Little Havana, Bev and I have maintained our fondness for Cuban sandwiches and have made a version of them on occasion.  Key components of the sandwich are the Cuban Pork and the Mojo sauce and Bev decided they would make a good Thursday night meal for our friends – not as sandwiches.

We had a 4½ lb. pork butt in the freezer along with 1½ lb. of country style ribs (which are just sliced-up pork butt) and we believed this would provide plenty of meat for all of us.  In an effort to get the sauce over more of the butt surface area and have it cook the same as the ribs, I broke it down into smaller pieces – except for the bone. 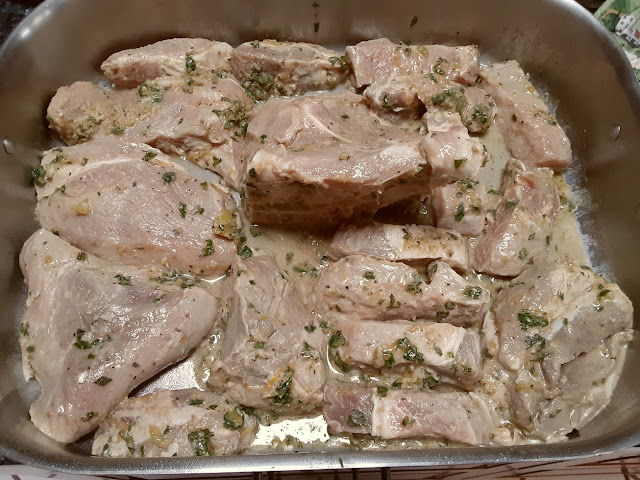 I had been wanting to make a Chinese dish with cashews so when Sil, Pat, gave us a jar of the nuts, I went in search of a recipe.  The one I chose was in my recipe file and it is Cashew Chicken from the very reliable Kevin on his Closet Cooking blog. Since I had 1½ pounds of chicken and wanted leftovers, I increased the ingredient amounts to get the one below.  Click on the link for the original recipes and more pics like this. 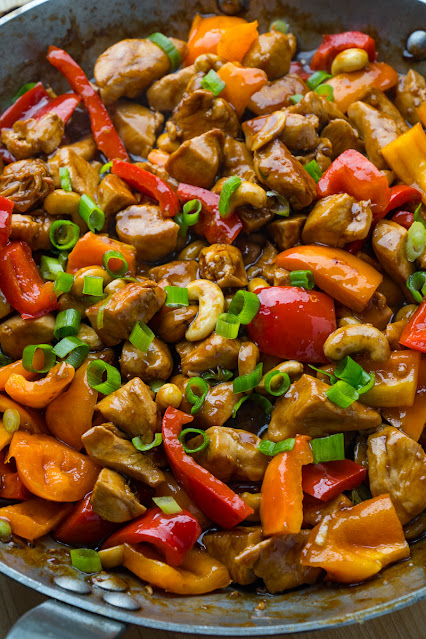 I often post a pic from the site the recipe came from because they are often from food bloggers who make it a priority to get good shots of their dishes, whereas I’m just getting a few shots of the food before it gets cold – their shots show what my dishes should look like.

I bought a corned beef flat the other day specifically to make Reuben sandwiches but I can’t remember what it weighed.  I noticed on the label that it contained a fair amount of water which I assume is curing liquid that is injected into the meat to speed the process. 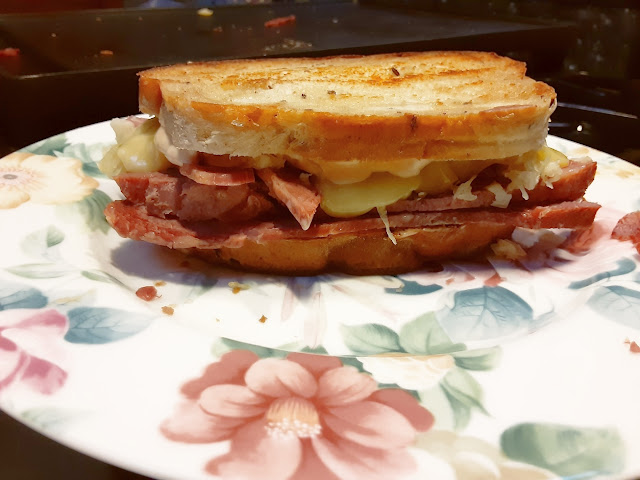 My darlin wife loves pizza and every so often she requires a fix and such was the case on New Year’s eve so she decided to whip one up.  She has made them by enhancing a frozen pizza, using a refrigerated pizza dough, and making the crust from some of her normal bread dough, but for this one, she opted to make the dough from scratch using Regal00 Pizza Flour that she bought from WebstaurantStore. 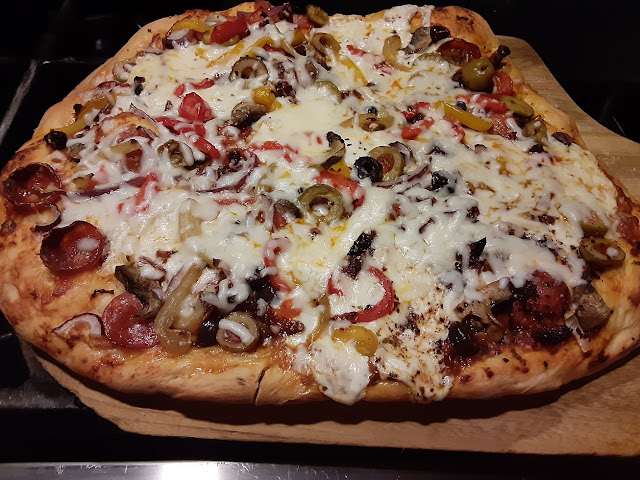 We’ve eaten schnitzel in Germany, Austria, Texas, and several other US places and have never had a bad one. Schnitzel is defined as a thin slice of veal or other light meat, coated in breadcrumbs and fried.  Wiener Schnitzel is made with veal, Schweineschnitzel is made with pork and Hähnchenschnitzel is made with chicken. When it’s made with beef, it’s the American invented Chicken Fried Steak which is believed to have originated from the Germans and Austrians who settled in the Texas Hill Country where beef was king.  This German influence is also likely why Texas BBQ menus include sausage.

This is a great looking rendition from the Daring Gourmet. 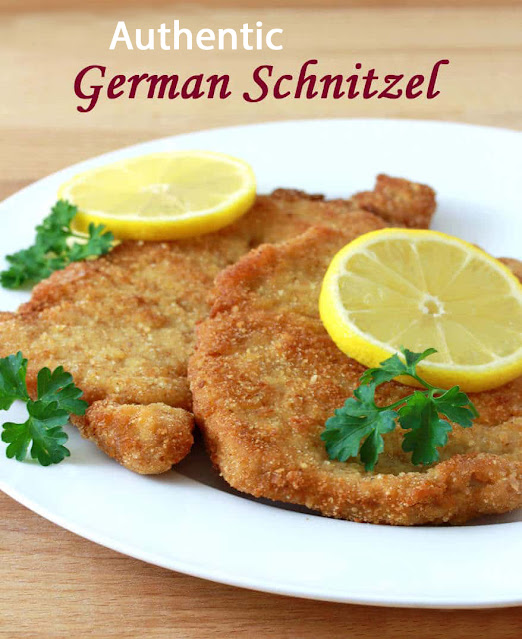