As a follow up to Tuesday’s sausage making post, if you are interested in making your own, a place to start is go to Len Poli’s site, click on formulations and be prepared to be overwhelmed with recipes.

Even though I’d smoked sausage on Tuesday, Wednesday was the first BBQ cook of the new year and decade. It was really a pretty light load, which is normal for mid winter. I did a brisket, a brisket as burnt ends, 2 cornish hens, a split chicken, two stuffed loins and 2 slabs of baby backs. Since most of these are my normal fare with many previous pictures posted, I’ll only discuss the new things.

There are almost as many BBQ techniques as there are BBQers and one of the debated issues is cooking temperature. I’ve usually cooked my ribs in the 250*-275* range as advised by many experts, but a while back I bought and read “Peace, Love, and Barbecue”, by Mike Mills – known simply as “The Legend”. My normal method always provided excellent ribs, but I always had meat pull-back, which is bare bones along the rib edge where the meat has shrunk. Per Mike, cooking the ribs at 225* will eliminate this and so I tried it today – actually cooked at 235*. I watched “The Pitmasters” on TLC and one of the good cooks commented on the nice pull back he had on his ribs – I think I’ll stick with Mike for now. My ribs took about an hour and a half longer to cook, but as you can see, virtually no pull back. Unfortunately, they are for a customer so I can’t sample them – I’m confident they will be great. 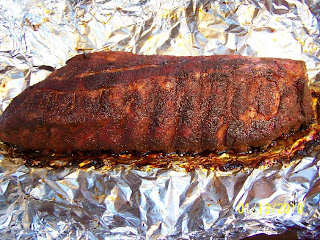 The highlight for today’s cook is the two stuffed pork loins. You can visit their blogs for recipes and great photos. I used two different stuffing recipes that I borrowed from others. Here is a shot of mine heading for the smoker. 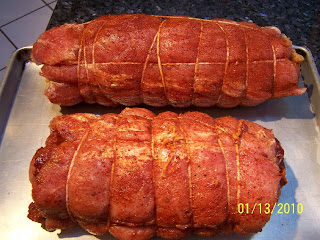 The shorter one was stuffed with chorizo and raspberry sauce following Dave’s recipe from My Year On The Grill and here's a shot of it sliced. 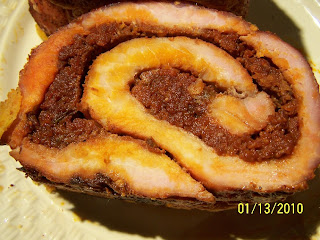 The longer one was stuffed with cornbread stuffing using Larry Wolfe’s Wolfe Pit recipe. I pretty well followed his recipe and stuffed a half loin with it. Here is the sliced pic. 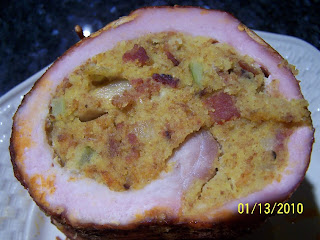 I obviously didn’t use the bacon explosion method that Dave did, but I did put a little of my pork rub on the outside, which should compliment the stuffing, on the outside of both and spritzed them with apple juice at the 1 ½ hour point and again when I pulled them. I liked them both, but not being a sweet cornbread fan, I will use something other than Jiffy Mix the next time.

All-in-all a great day at the pit and I should have plenty until the next cook in four weeks – I BBQ at least once every four weeks for family, friends, and us.

You know the worst thing about being a blogger – I read about 6 of your dishes every day that I’d like to try – too many meals, too little time.

Have great day and I enjoy your comments.