I suggested several things for Fridays supper, but Bev turned them all down, including grilled steak and scallops, and opted for a hamburger – her favorite beef dish. I remembered wanting to try a green chile cheese burger after seeing Bobby Flay make one recently, and we just happen to have some home grown peppers in the freezer. I looked around the net and most recipes utilized a sauce made from the peppers, but I didn’t want that. I finally found one that added chili powder and cumin to the meat and then just added grilled peppers and onions on the burger, which was more what I had in mind.

For a pound of hamburger, I mixed in a teaspoon each of salt and Billy Bones Bucksnort Chili Powder, and a half teaspoon each of cumin and black pepper. In case you think I just can’t spell, for me, chili is a soup concoction and chile is the fruit from a particular genus of peppers. Since we had pretty big buns, I made up 6 oz patties – I like the meat to be bigger than the bun so that the first thing my tongue meets is the meat. Here they are ready for the grill – note the anti-swell-up-dimple in middle of them. I could have gone to 7 oz, but I don’t like them to be so thick I can’t get my mouth around them, so I’d fail at TV quality burgers – which always look to be an inch thick. 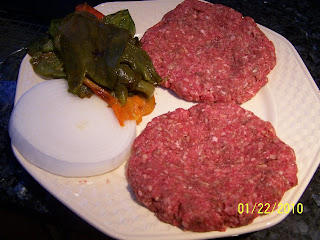 I grilled them until the juice just came to the top, flipped them and when it did it again, I added a slice of smoked provolone and cooked another minute and took them off. While they were cooking, I also grilled the onion and warmed the green chiles. Here’s everything cooking. 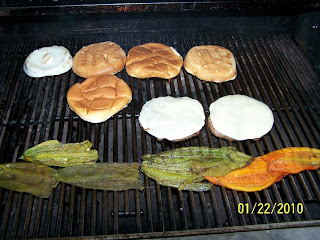 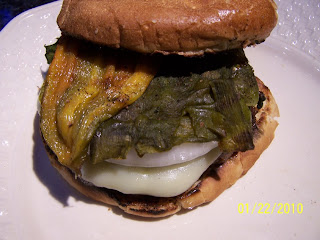 I might try them with the chile pepper sauce sometime, but these would be hard to beat. The spices were evident in the meat, I could taste the peppers, and I really liked the combination of flavors. The two things I’ll do different next time is mix the spices in the meat the day before to let the flavors distribute in the meat and put the onion on the sooner – it was a potent little fella – typical wintertime onion.