Beverly is the baker in the family – it scares me to think of even trying – and she bakes bread about once a week using a sourdough starter given to her by a friend. After just having burgers for dinner and seeing others do it on a couple of blogs, I suggested she make one loaf of bread into six burger buns. She did it by cutting the dough into six pieces, making a ball and hand shaping. I’d looked up a couple of recipes that suggested rolling out the dough and cutting them like biscuits.

I thought for first try hers turned out great. They did not have the consistent round shape cutting them out would have achieved and they were a little crustier than store bought, but I consider both of these signs they were homemade. Here’s a shot of Alex’s meal of burger and sautéed shrooms. 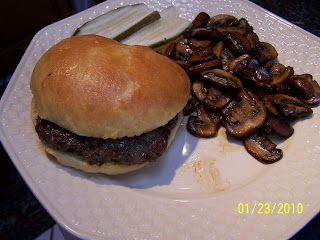 Bev pretty much just bakes loaf bread and occasionally rolls for special meals. After the bun success, I think I have her convinced to expand her horizons with round loafs, crusty Italian, French baguettes, etc. And the best part is I’ll have to test them all out. I also hope for the next bread day, we can make some pepperoni rolls, pistolettes ala Chez and rolls for baking eggs in.