Eliza brought her parents down on Sunday to play in the lake as the season winds down and we invited them to stay for hot dogs.  For a side dish, I remembered that I had been wanting some pasta salad and after some looking, I found the recipe for one that I had made it the past, really liked, and was somewhat healthy.  I made it the day before so the flavors could marry well. 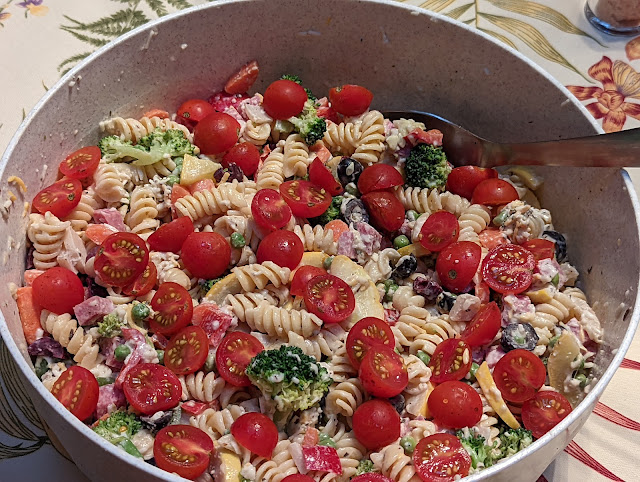 Do you remember my June 5 post where I mentioned that daughter, Wende, had brought us a new supply of sausages from The Wurst Kitchen in Aurora, IL or the July 15 post about making our first homemade kraut in several years or the August 14 post that included homemade spaetzle?  Well, it’s okay if you don’t but they are all involved in this meal that is timed to use our newly made kraut which has been fermenting for nearly seven weeks. 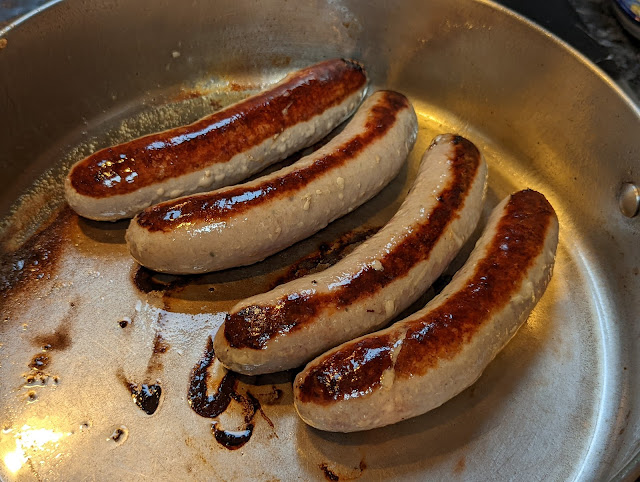 When I saw the recipe for this dish from Kevin’s “Closet Cooking” blog, I thought it would fit into our plan to cook a meal then eat leftovers for a day or two.  Since I wanted leftovers, I doubled the recipe to get the one below.  The original recipe, along with some great pics and nutrition info can be found by clicking on the above link. 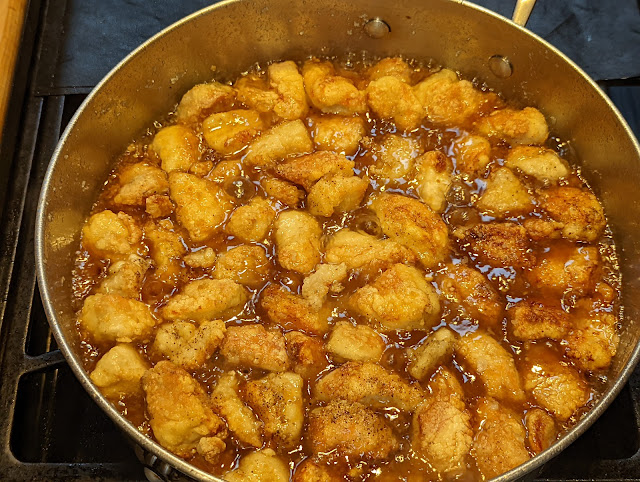 I had some andouille in the fridge and decided to build a meal around it opting for jambalaya since I also had shrimp and chicken.  After looking around the web, I settled on the recipe from Café Delights.  The only changes I made involved the heat level and I served red pepper flakes on the side.  Karina’s original recipe and a few pics can be found by clicking on the link above.  Since I couldn't get to our Dutch oven and was afraid the 12" sautee pan might be too small, I used our wok and it worked fine. 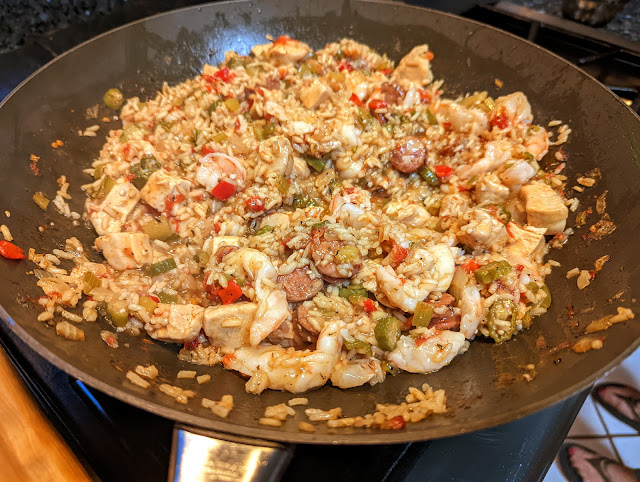 If you missed reading any of these posts, you owe to yourself to check them out as they would all be on the menu at my gourmet restaurant : Kennedy Quiche, Braised Pork Shanks, Chicken Sorrentino, Heirloom Tomato Pie, Holsteiner Schnitzel, Eggplant Involtini, and this one.

I first saw this recipe on the “Ask Chef Dennis” blog and decided it was a dish we should try without the heat for Cindy and Pat.  Then I subscribed to Cook’s Illustrated and opted to use their recipe for Shrimp Fra Diavolo with a few changes beginning with doubling the recipe so we would have leftovers and we served it with the crushed red pepper on the side for those who wanted heat - most of our group does not.  While I’ve seen several simpler recipes for the dish, I still opted to go with the CI one because it cooked the shrimp shells in the sauce.  Cindy did a great job cooking this meal for me. 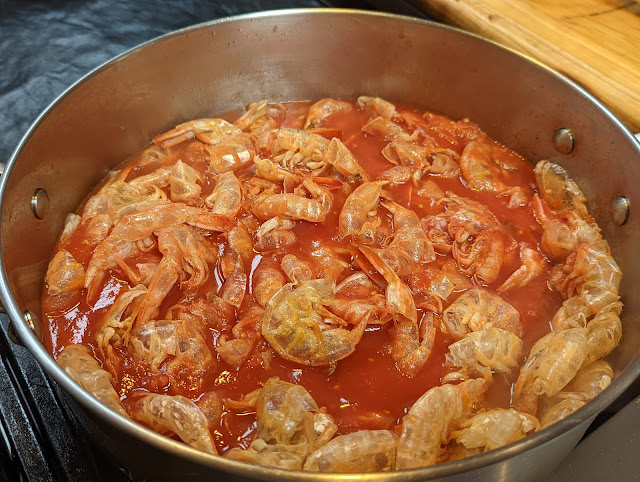 Cindy made this dish once before but I didn’t blog about it so when she wanted to make it again and remembering it was delicious, I wanted to be sure to get it documented.  She had found the recipe in a Cook’s Illustrated (CI) book that she discovered at a friend’s house and since I have always enjoyed CI and to get access to this recipe for Eggplant Involtini electronically, I decided to join the CI site for less than $10/mo.  This is a pic of the dish from the web. 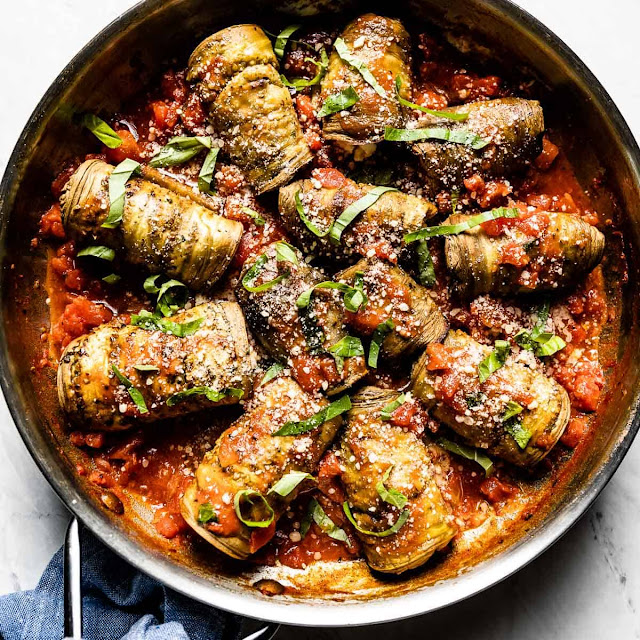 When I cut up a whole pork loin for the freezer recently, I went ahead and got some of it ready to make schnitzel by pounding it thin with the Jaccard.  We like it bare or topped with various sauces so I did a web search for possible sauces and I found this recipe from “German Culture” that absolutely had to be tried.  The lemon, butter, caper sauce is a big favorite of ours and then it is topped with a fried egg - talk about a no brainer recipe for me.  Here is the shot of mine then theirs. 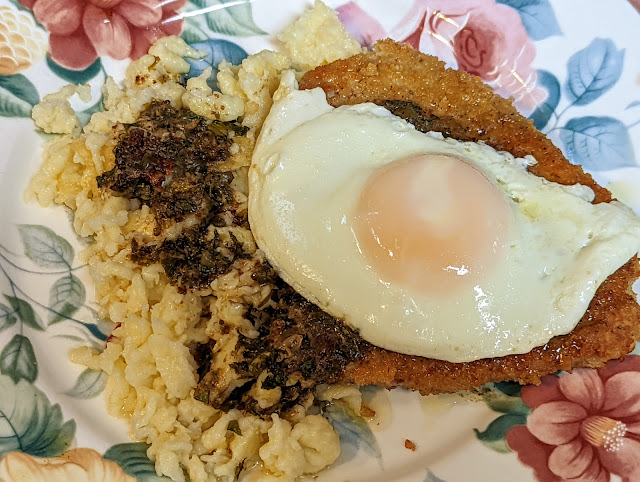 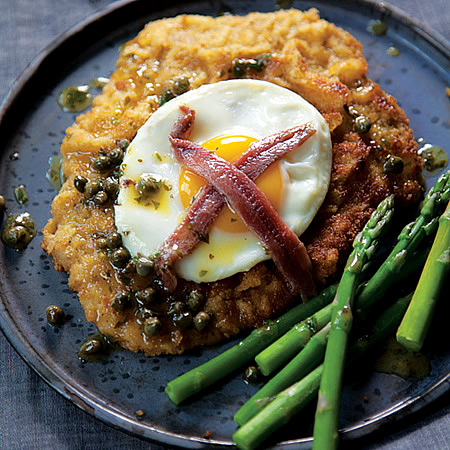 When this recipe for Parmesan Crusted Chicken showed up on my blog reading list, I knew from the first pic (below) that it had to be tried.  Since I had 2lb. 6oz. of chicken, I scaled up the recipe to get the one below.  Visit Jenn’s “Once Upon A Chef” blog for the original recipe and a bunch of how-to pics for the original recipe and lots of how-to pics. 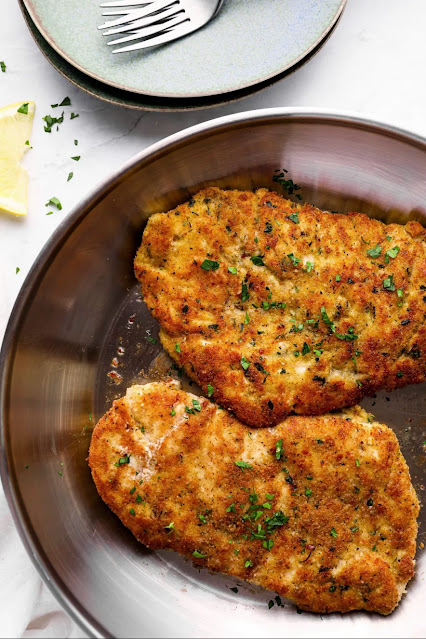 Brisket & Halibut Tostadas And Gnocchi Something For Breakfasts

After four gourmet meal posts, it's time to get back to the basics - breakfasts from leftovers.

When I posted about my foot surgery, I said I probably wouldn't be posting as much but as it turns out, I have all day to plan meals and Bev and Cindy are both cooking so I actually have more to post about than before.

As usual, I’ve been trying to use our leftovers for breakfast as I believe nearly everything is good topped with an egg.

I still had a few brisket slices in the fridge and Chef LeaAnn’s recent tostada post inspired me to make one for breakfast.  It was built from a fried corn tortilla, reheated brisket, diced onion, sliced white cheddar in a skillet with a lid to melt the cheese, then topped with a fried egg from another skillet. 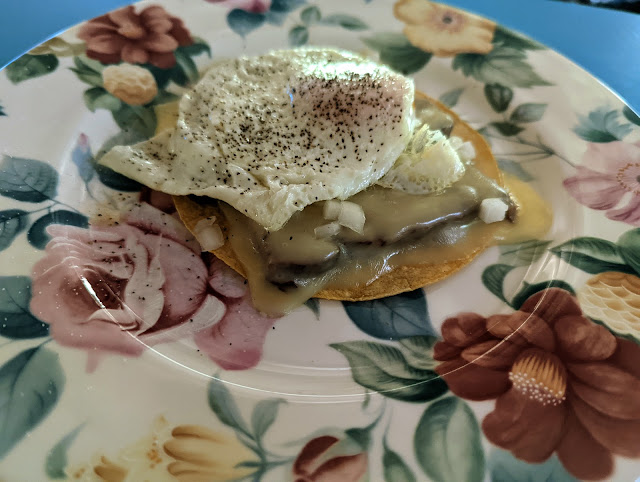 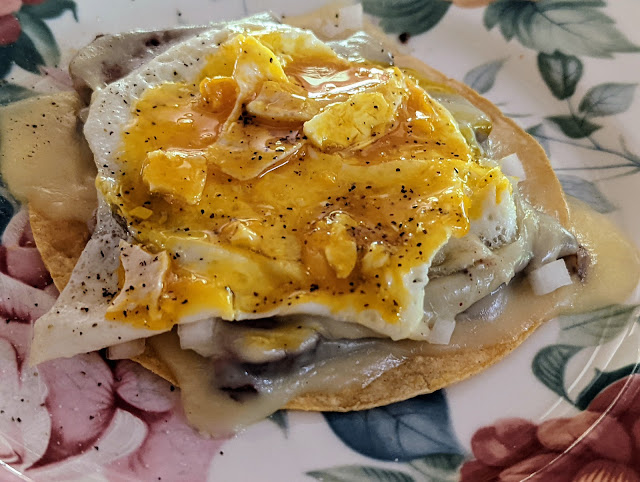 Bev made this delicious tomato pie back in 2020 but she used a refrigerator pie crust and too large of a dish so this time she followed the recipe as written beginning with the pie crust.  Here is the link to the original recipe. 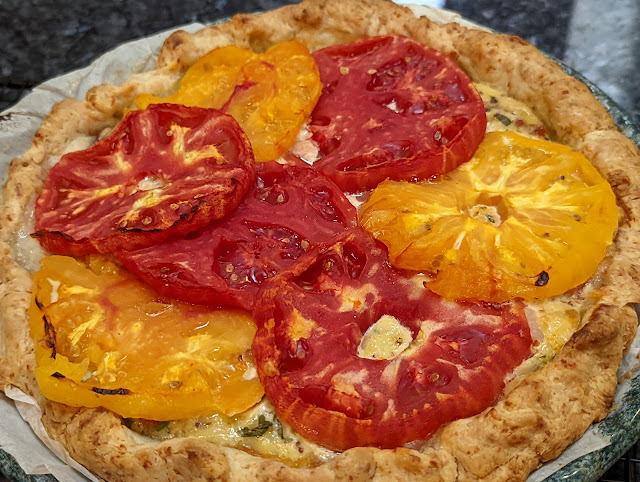 We love both Chicken Parmesan and Eggplant Parmesan so when Dennis posted on his “Ask Chef Dennis” blog the recipe for Chicken Sorrentino, which contains them both, I knew it had to be tried.  His recipes have the feature that changes the ingredient amounts for more or less servings and I increased it for six servings to get the recipe below.  The original recipe along with great how-to pics can be found by clicking on the above link. 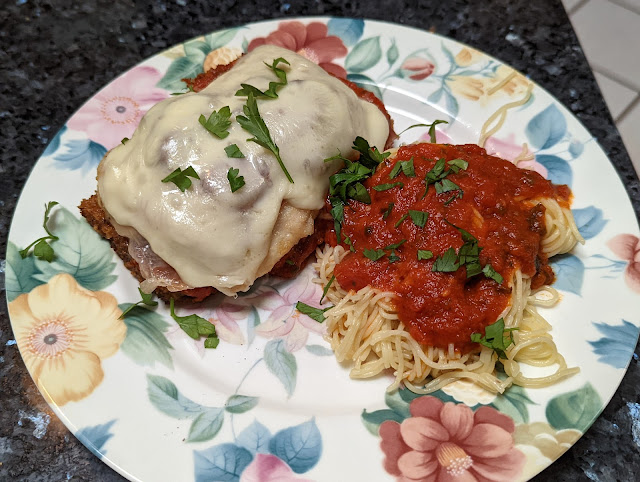 I like to watch “Diners, Drive-ins, and Dives” in order to discover places to eat when we travel and to get meal ideas and recipes.  During one show, a restaurant served braised pork shanks topped with salsa verde but they didn’t provide a recipe.  I searched the web and found a recipe from Food & Wine that seemed to fit the bill with some modifications and I hoped would create this.  I don't know the origin of the dish but since I've had it in German restaurants here and in Germany, somewhere in Europe is likely a good guess. 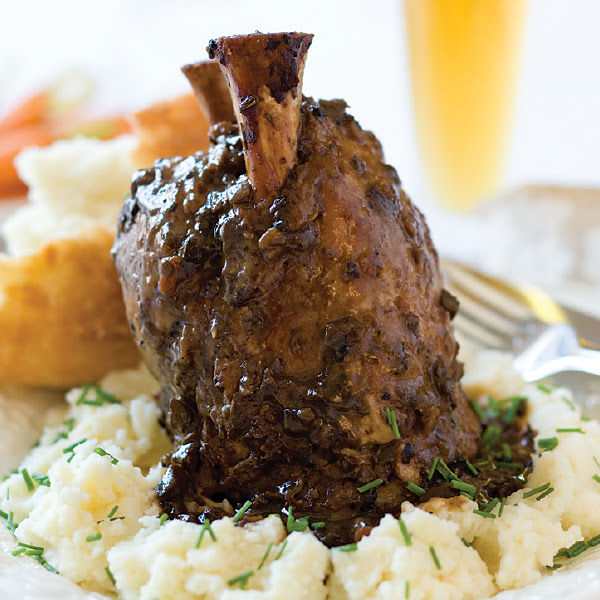 Kennedy Quiche Frittata Then Brisket For A Delicious Breakfast

Over the years, we have made this quiche several times, especially when we have extra tomatoes, but I can’t find that I ever blogged about it.  The recipe came from our local newspaper many years ago and I could only find it on-line in one place but it was supposedly a favorite of John Kennedy. 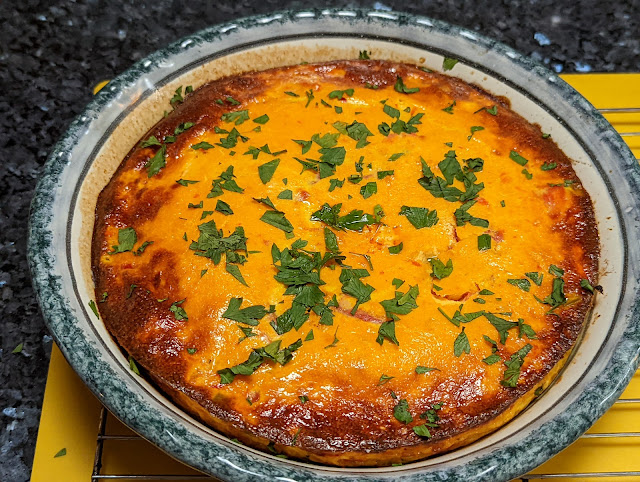