I haven’t made sausage in awhile and was completely out. Since the local meat market had pork butt and beef bottom round on sale and I’d just inherited some deer burger from a friend, it seemed as though the time was right. I made three different meat mixes all using the spice blend from Novak’s market that I’ve used in the past. First batch was a 50/50 mix of pork and beef, then a 100 % beef, then a mix of 4# of deer and 6# of pork. The market ground the beef and pork for me. This is everything ready to begin. 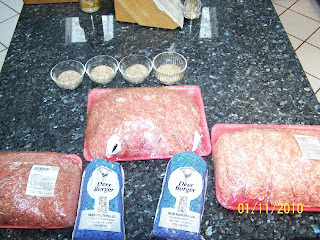 I mixed it all by hand and since I still don’t have a sausage stuffer, just made it into fatty’s (smoked logs of uncased sausage). This is the beef with half the spices and after mixing them, I added the other half and finished mixing. 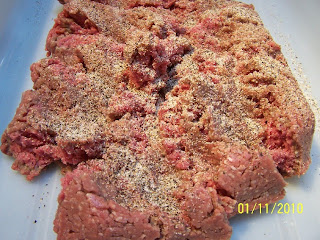 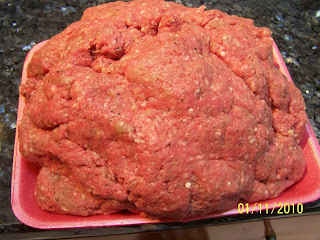 This is the pre mixed pork and deer - no one ever accused venison of being the other white meat :) Second pic is after final mixing. 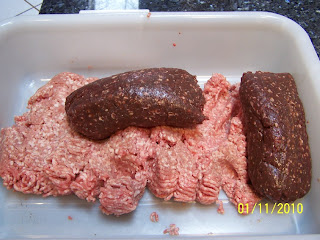 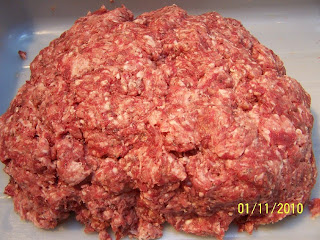 I put it in the frig in bulk over night for the spice flavors to distribute throughout the meat.

Tuesday morning I rolled everything into 1 ¼ pound logs in preparation of smoking. I’ve found I loose about 3 oz during cooking, so I should end up with just over one pound finished pieces. I first tried my jerky gun for making the logs, but found that each addition to the barrel was not bonding to the previous one and rather than try and figure out how to make it work, I just rolled them out by hand. Here are the 5 logs of all beef – the others look the same – except for color. I ended up with 5 of beef, 6 of beef/pork, 8 ½ of pork/deer, and a patty of beef/pork for lunch (which was real good, especially with some melted cheddar and mayo). The sausage was smoked with only the spice mix and no rub, baste or other outside addition. 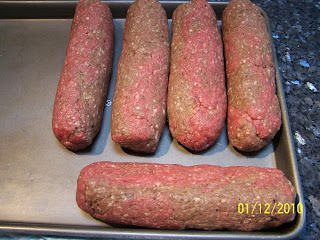 I lit the smoker at 1:45pm with the outside temp a balmy 30* and I put the sausage on at 2:30pm with an external probe thermometer in one piece on each shelf.

I smoked to an internal temperature of 148* per recommendation from Novak’s at a pit temperature of 225*, and it took about 3 hours – it’s usually faster, but I wanted to see how I liked it cooked at a lower pit temp, especially from an external color standpoint. I’m sure I’ve said this, but I have a BBQ Guru on my Stumps Smoker and it does a great job of maintaining the pit temp. Had the meat been in casings, I would have used a much lower pit temperature to ensure no fat melting and resulting shriveled sausage. I’m going to keep doing this, I may have to get me a stuffer, and perhaps a grinder, so I can become a serious sausage maker - except Bev likes it better without the casing.

Here are a few shots of the finished product. The first is the whole load - we tried the small have fatty which was pork/deer and it was very good. 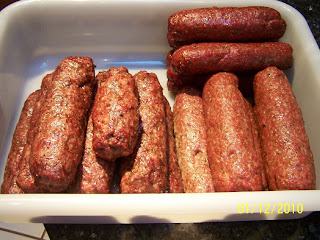 This is a close up of the beef. 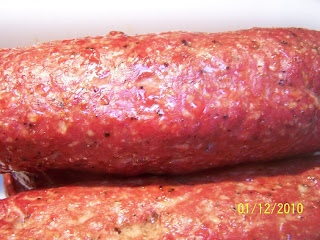 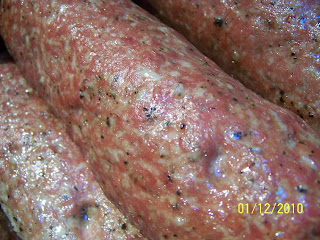 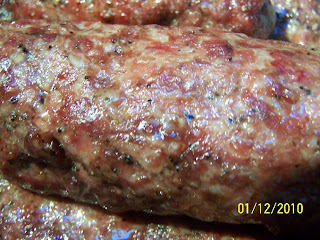 This is the half one which we used for sampling - note the smoke ring. 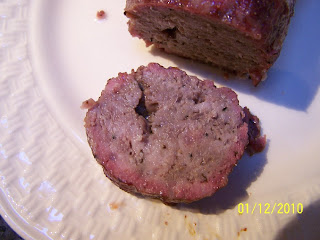 I was real pleased with the color and flavor of this batch, but will have to order more spices tomorrow.

And remember, if you have a grill, you also have a smoker - email if you need advice on how to do it.