One is a golden oldie and the other is brand new to us. Since I retired 10 years ago, I eat an egg or two most mornings – I know, some say they’re bad for me, but I just love eggs and in case you're a new reader - I love breakfast food. For all the eggs I’ve eaten, I’ve never had them baked and had been wanting to do so since seeing Ina Garten fix them on the Food Network. I used her recipe, except I wanted them that morning, but didn’t have fresh herbs, so after putting them in the little prep bowls, I sprinkled with a little dried thyme, parsley, chives, and garlic powder (I was just too lazy to mince fresh garlic) in hopes they would re-hydrate some while the ramekins heated up. After adding the eggs to the heated ramekins, I sprinkled on the parmesan cheese and back under the broiler they went. Rather than use the big oven for this small job, I just used the toaster oven and both the pre-heating and cooking took about 50% longer than Ina’s recipe calls for.

I didn’t take a picture as it would not have been too impressive, however, we are both now big fans of herb baked eggs and look forward to trying with different herb blends. One of the real pluses is how quick and simple they are to prepare.

Somewhere I have a recipe for the second meal called hunters breakfast, but I have no idea where to find it. As best I could remember, it is a scramble of potatoes, onions, ham, and eggs, but I like to include peppers as well.

I used 5 small red potatoes, a medium Spanish onion, sweet peppers from the freezer, diced center cut ham, 7 eggs whipped with a little half and half, salt and pepper – I wanted enough leftover so I could have the same meal tomorrow without cooking. While writing this, I told Bev I should have put some garlic and herbage in it - I'll try adding some to the leftovers prior to reheating tomorrow.

I started by cooking the potatoes in olive oil, then added the onions and peppers, then the ham and finally, when the other ingredients were done, the eggs. Here it is cooking before and after the egg addition. 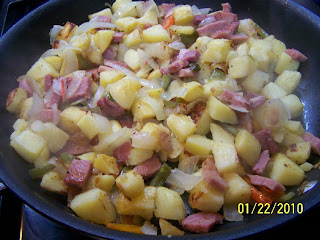 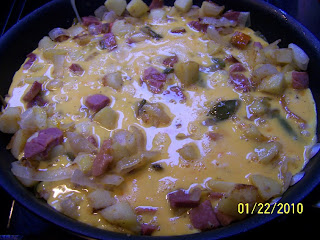 Here's my plate after I Chez-ized it by adding shredded cheddar - he does this alot but I use Cabot cheddar rather than his usual Tillamook. I opted for no sides, such as toast, so I could get my fill of this dish. 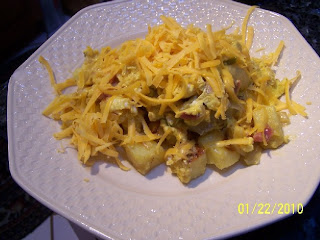 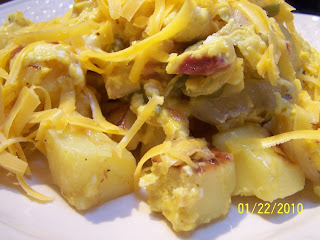 The title photo is my first attempt at Bacon Explosion (bacon wrapped stuffed fatty) from last March, except mine is stuffed with hash browns, scrambled eggs, onions, and peppers - another Lipitor meal.