While not as cold as it’s been, Sunday was still a cold, rainy, dreary day – sounds like a perfect tomato soup and grilled cheese sandwich day. It was my day to cook and I used a recipe from Michael Chiarello of the Food Network because I liked the idea of roasting the tomatoes. I doubled the recipe and used a quart of our home canned tomatoes and we had no fresh basil but did have some homemade pesto frozen as ice cubes – so I used one of them (moved out of my follow-the-recipe comfort zone).

Here are the drained and chopped-up-a-little-more tomatoes before the oven. The juice on the pan was about to burn, so I removed them from the oven before they were caramelized. 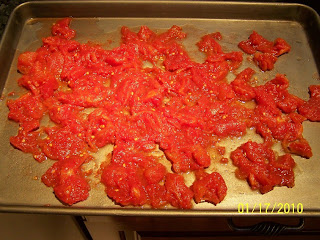 We squeeze most of the juice from our tomatoes when we can them, as seen in photo - not much, so I added some additional juice to the soup. 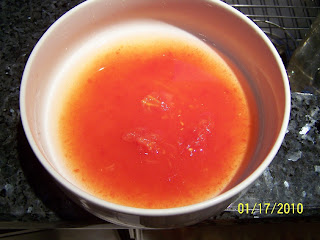 It’s always fun to write about meals that exceed your expectations, but every now and then they fall short as did this one. I liked the soup, but Bev was wanting one that looked and tasted like a classic tomato soup. The carrots gave this one more of a squash color and the large amount of olive oil was very evident, so it tasted more like and olive basil with tomatoes in it soup. Here it is in the pot after being treated by the immersion blender. 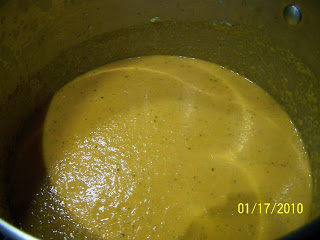 My bowl full - definately does not look like tomato soup. 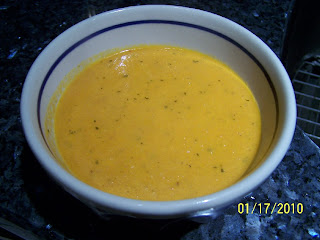 As I said, I liked it, but enjoyed it for what it was.

For the sandwiches, we like tomatoes and a little onion on ours, so since I had the oven on, I decided to pre-roast them with a little oregano sprinkled on top. I just sliced the tomato, spread a little chopped onion on top and lightly sprinkled with dried oregano. I used Cabot sharp cheddar and smoked provolone for the cheese. Sandwich assembly was homemade bread, mayo, cheese one, tomato/onion, cheese two, mayo, bread.

We then brushed the bread with melted butter and grilled them over medium heat until golden brown and the cheese was melted then served with sliced Clausen dill pickle – which I added to my sandwich. Here’s a shot of mine. 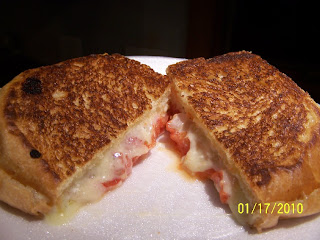 The sandwiches had a good flavor, but some of the tomato got to the bread and that side was a little soggy - ended up eating it with a fork, buy still enjoyed it a lot. Two lessions learned here – take the sandwich off and sit it on a rack for a couple of minutes to allow the bottom side to dry a little or flip the hot side up, which I normally do (this may have added to the soggy problem) and add the tomato to the sandwich after grilling. It’s bad when you have a problem with something you’ve been cooking for 50 years, but I did a couple of things different and learned from it. Even us old guys are young enough to learn :)