Other than my basic lack of culinary skills, one of the major inhibitors to my being a good cook is difficulty varying from a recipe. After a lifetime in the engineering world where bridges collapse and planes crash when the plan is not strictly adhered to it is difficult for me not to follow a recipe explicitly - so today’s meal is practice at being more creative. When we decided to smoke a turkey breast for making Hot Brown’s (see yesterday), I’d also looked around and found a recipe for a Hot Brown Frittatta on the Food Network which sounded very good so I book marked it for use with the extra turkey, which I was sure we would have. Sunday morning I was ready to make it, but decided I did not to want to wait for nearly an hour while it baked, so I decided to use the concept to make a scramble instead (deviation 1).

I made half the recipe (deviation 2) and only used about ½ cup of cream (deviation 3) so it wouldn’t be too watery. While visiting my son before the holidays, we’d visited a store run by a small Mennonite community in the area and one of their offerings was a cheddar cheese that also contained the bacteria that makes blue cheese, so we bought a wedge of it and I used it in this dish (deviation 4). We are also big fans on Guggisberg cheeses from Ohio Amish country and when my neighbor placed an order recently I got three kinds as well – one of which is Farmers which I used in here (deviation 5).

I didn’t measure the onion but used a piece we had in the frig that looked close enough (deviation 6) and I diced the fresh tomatoes we had left from the Hot Browns rather than using canned (deviation 7). Here’s a pic of the ingredients ready to go. 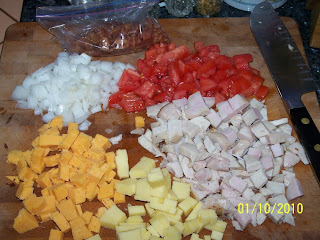 Bev likes to buy particular eggs at Walmart called All Natural that have Omega-3 and and something else that’s supposed to be good for us -one of the things we like is the more orange color of the yolk. I used three of them and three brown eggs, which many folks assume are the richer, and this shot shows the difference – the brown eggs are the lighter colored. 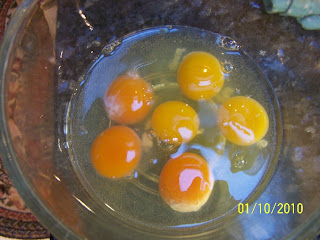 I first sautéed the onion and tomatoes in a butter/olive oil mix ( rather than the specified bacon grease- deviation 8) to remove some of the water. 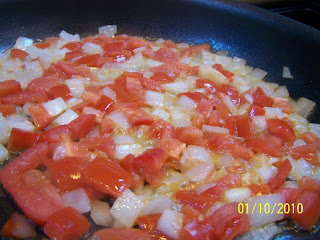 Then added the turkey to begin warming up. 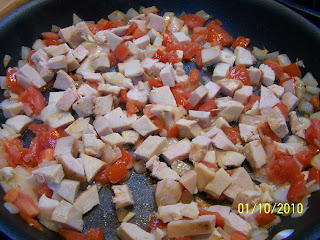 Next added the cheese and bacon. Since we like our eggs scrambled moist, I wanted to give the cheese a chance to warm up and start melting prior to egg addition. 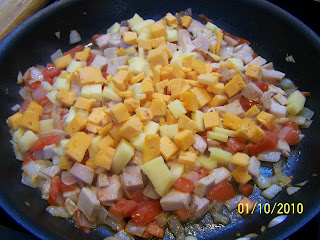 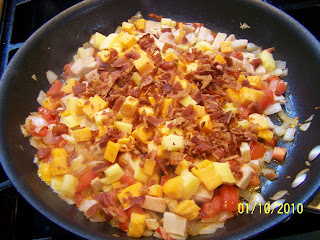 Lastly, added the eggs and scrambled them. 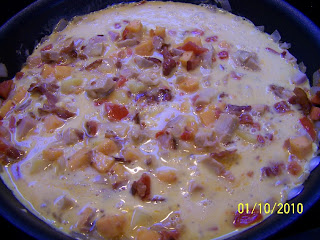 Here’s a shot of Bevs before the Mornay sauce, she wanted hers on the toast. 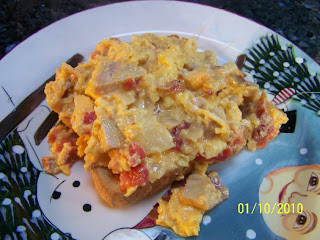 Here’s my plate and close-up, finished up with leftover Mornay sauce and a little parsley - ready to devour. 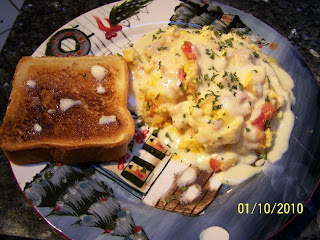 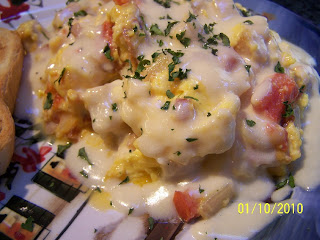 It was delicious and the only thing I’d do differently is use a little less of this cheddar as it had just a tad too much bite for my taste – those who like blue cheese sauce on steak would have likely thought it perfect. This meal will definitely happen again whether we have leftovers from Hot Browns or not – we almost always have some smoked chicken (possible deviation) in the freezer. I made at least 8 recipe deviations and got an excellent result and since I didn’t measure anything, I’ll have to wing-it next time – maybe there’s hope for me yet.

PS – It’s also delicious without the sauce – another deviation? – I think I may be getting out of control here.

Have a great day and stay warm – it's finally supposed to get above freezing today. I sure hate it for all the folks whose livelyhood has been impacted by the cold.