I can’t believe I did this – but I did. Back on Dec 20, I posted about a whole rib eye that I had bought and cut into steaks. I cut up the whole thing, laid out a couple of steaks for dinner and stuck the others in the frig to vacuum seal when Bev got home – she’s the Foodsaver operator. Yesterday, I brought up from the downstairs frig the second one I’d bought the same day to remind me to remove it from the cryovac, carve, package and freeze today. As I was putting it in the upstairs frig, which now had a lot less stuff in it, I couldn’t help but wonder what was the big pile of stuff on the plate wrapped in foil. Oh no! I exclaim as I find the 8 thick steaks the top of which looked pretty bad – I’d also been wondering what the smell in the frig was for several days. I can’t believe I did that. Fortunately, I’ve seen and read many shows and articles on dry aging and believed we might be able to save them. So this morning Bev suggested we clean a couple of them up and have for breakfast, which she proceeded to do. I can’t believe I did that.

I was sitting in my chair reading the morning paper when Bev asked if I wanted to make a picture of breakfast. Since she regularly ridicules me for my food pictures and having nothing better to do than blog, I was more than a little surprised – so I hustled into the kitchen, camera at the ready. She even said to wait while she sprinkled a little chopped parsley around the plate for pretty – I’m slowly winning her over (shhhh).

She just pan fried them and I think they were a little more tender than the first ones we ate - maybe the dry ageing helped. She was just planning to cook one but decided she wanted a whole one for herself so we each had one - and here's mine. 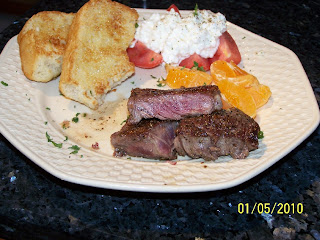 The steak was excellent and we didn't get ill, so we're good to go. After breakfast she cleaned up the other 6 steaks and into the freezer they went – we kept out one for a taste test. I think she wanted to do this because she doesn’t think I take enough of the fat off the ribeyes and this way she can do it to suit herself – works for me. Have I said I can’t believe I did that.

When she got done, I cut the other whole ribeye into a roast, some thin slices for Philly cheese steaks and 1 ¼” steaks - kept one out for a taste test. Wow, sure dodged a bullet. I'll save the pictures of these until we eat them.

I usually keep my posts shorter than this, but since it's about these steaks, I decided to cover both breakfast and dinner in one. Bev has been wanting to try Steak au Poivre for some time and since we have two steaks laid out, seems like a match. Looked around on the web for a few minutes and decided on this one because it sounded like the classic recipe and we have all of the ingredients. We did make double the amount of sauce to ensure we had enough. Also, we included red peppercorns as our blend already had them in it. The recipe is from the January 1994 issue of Gourmet Magazine coutesy of Epicurious.

In a heavy-duty sealable plastic bag or between 2 sheets of wax paper crush peppercorns and fennel seeds coarse with bottom of a heavy skillet. Pat steaks dry and coat both sides with peppercorn mixture. In a 10-inch heavy skillet heat butter and oil over moderate heat until hot but not smoking and cook steaks for 4 to 5 minutes on each side for medium rare. Season steaks with salt and transfer to plates.
Pour off excess fat from skillet and add cream and Cognac. Boil mixture, scraping up browned bits, until sauce thickens and coats back of spoon, about 1 minute. Season sauce with salt and spoon over steaks.

Our neighbors gave us a gift certificate to a local fresh seafood shop which we spent today and one of the items we bought was their shop made crab cakes. We had them as an appetizer tonight and they were excellent - more of a cajun than Maryland style. 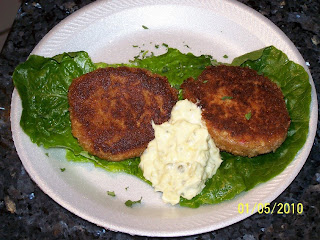 Now for the main course - after the crab cakes, we decided the steak would be suffecient - so no side dishes. We used our dedicated coffee grinder to bust up the pepper corns, put a teaspoon or so on each side and fried them in a hot cast iron skillet. I took a picture of my plate, but it was too bad to post - guess I was quivering with anticipation. It was just a shot of a ribeye with a tan sauce on it. We did do a little taste test with one fresh cut steak and one of the accidentially aged ones. Not sure it was valid since they were from different roasts, but the aged one may have been a little more tender - both were very good.

I've never had this dish but would eat it again - I'll try it in a restaurant to see how ours compares. The first bite was a little peppery, but the more I ate the better I liked it. I tasted the sauce in the pan and was not impressed, but it was great on the meat. If you like steak and you like pepper, I highly recommend this dish.

Have a nice cozy evening by the fire - that's what we're doing.