Sausage Gravy & Biscuits With A Kicker

I’m not a hunter, but I have family members who are, so when a friend asked if I knew where he could get some venison for his mother, I answered perhaps so. Since I had a trip planned to West Virginia at Christmas time, I gave my cousin a call and asked if he could harvest and process a doe for me. He checked about the processing and advised a deer could be arranged which ended up being supplied by his 12 year old grandson as the hunter. My son ended up making the trip to West Virginia instead of me, but the packaged and frozen venison still made it back to me and on to my friend - and his mom was very happy with her Christmas present.

This was a long way of saying that they also sent me some of the items they had made from their own hunting. One item was a couple patties of venison/pork breakfast sausage, which I fried up for breakfast. I still had some sausage gravy from the other day, so breakfast was a biscuit & gravy and a venison sausage biscuit to which I added a little cheddar cheese - may need a bigger biscuit next time. It was an excellent way to start the day. 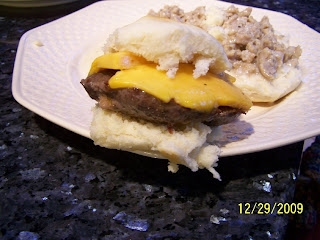