I’ve posted several times that the kid in me likes the occasional nice 6” snow but I’m sure glad it’s been warm for the past week. According to my rain gauge, we’ve had 4 ½ inches, which could have been about 4 feet of snow. Since a 6” snow shuts everything down around here, you can imagine what snowfall measured in feet does.

Remember earlier this month, I posted this picture of my lake cove frozen over – it was also at winter pool, which is six feet below summer pool. 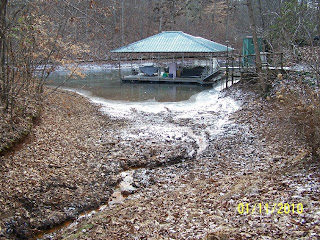 Here’s the same shot taken late morning on Jan 25 and the water has risen about four feet and came up another foot after I took this shot. 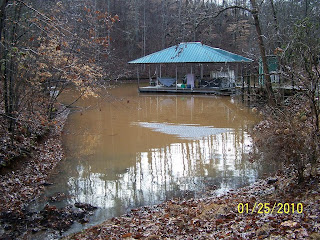 I'm glad we live on top of a little hill and don't have to worry about flooding, unless we see an ark floating by. I believe all of the regions drought starved lakes of a couple of years ago should be more than full by now. How do you like the appealing color of the water - it may be even browner than the photo shows. Before the days of flood control dams that slowed down the river flow, some of this silt may have eventually contributed to the continued area growth of Lousiana. I can only imagine what the flooding would have been like had the lakes not been there to store all this water.

The title photo is Kitty (clever name huh?) the resident mouser. While commenting on a blog yesterday, I had to toss my compter aside and race to rescue a Tufted Titmouse she had brought in - pet doors allow her outside access. I'm sure it's quite a show to watch, since I can't catch the loose bird, but have to let Kitty catch it then get it from here before too much damage is done. In this case, the plan worked great and the bird flew off as soon as I opened my hands. It's hard to believe such a docile looking creature could be such an effective killer.