Wednesday was supposed to be soup day but we delayed it to make chicken cacciatore and since I’d promised some to friends by lunch today, I whipped up a pot for brunch this morning. We made the soup by a recipe from my aunt that she merely calls ditalini, but it’s more white beans than pasta so I changed the name. We used her recipe as written but added greens to it and in the case of today, it was some Swiss chard given to me by a friend. We’ve also used kale and like the addition of the greens for their nutritional value and the color they add. If you like the health benefits of the greens but are not crazy about the taste, this is a great way to eat them, as you can barely taste them in the soup.

· Cook noodles and drain
· Wash and chop greens as you like and saute to wilt in a separate pan
· Saute onions until tender, add garlic and cook until fragrant
· Add beans and ½ the broth
· Add ham, parsley, salt and pepper
· Cook 15 minutes on low
· Add remaining broth, noodles, greens, adjust seasonings, heat to simmer and serve.

I didn’t take any pictures of the cooking process, but here’s the finished pot and my bowl. 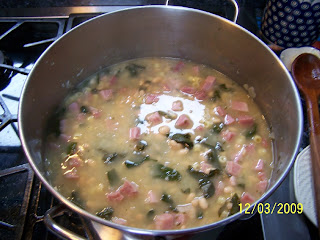 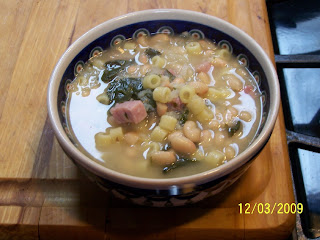 Awhile back, I had made a flat pizza fatty link using breakfast sausage as that’s what I had on hand. Bev found some bulk Italian sausage the other day and we had some peppers needing to be used, so I made up another one today. I’m not smoking again until Dec 12, but made up the fatty just like the other one and stuck it in the freezer to be ready to go. I'll try and remember to post finished pics. Here's the bottom with veggies and cheese. 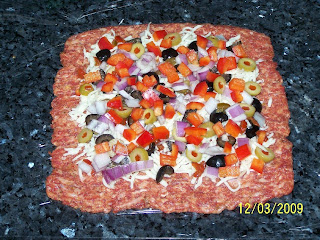 A layer of pepperoni added. 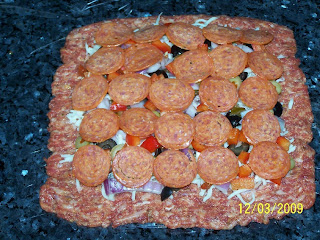 I added another layer of cheese and the top one pound piece of sausage and it's into the freezer until smoking time. 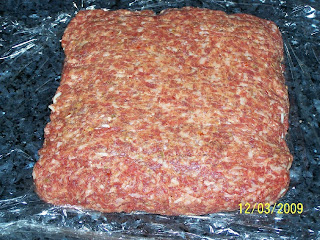 Only one minor problem as I was looking at the pictures on here, I noticed I forgot the sauce. Guess I'll take the top off and add some before smoking or maybe just sauce it when I eat it - I may like that even better.
Posted by Big Dude at 1:59 PM