I had several posts in the queue so decided to do two today - as if one a day isn't more than enough for you. After spending 8-10 years getting ready for the big event our Christmas tree performed admirably. It was cut down and on the tree stand, in water, within an hour and it continued to take up water the entire time it was up. As a result, it dropped very few needles and still looked excellent on take-down day.

There seems to be at least two traditions involving decorating for Christmas - not counting the commercial, start the Christmas season in August one. Around these parts, most folks decorate and put up their tree right around Thanksgiving and take it down very shortly after Christmas Day. In our family and maybe most others in the area where I grew up, the decorating was done just before Christmas, a week or so, then not taken down until after the new year. The final decorating of our tree often happened on Christmas Eve. It took a while to decorate as my mom spent hours hanging the aluminum foil icicles one at a time with just an inch or so of one end hanging over the branch until the entire tree was covered with several to the branch. It was beautiful when she got done - but if you think the hanging sounded tedious, she saved them from year to year so each one was carefully removed, so as not to get broken, and draped over a chair for wrapping and storage – we didn’t live in a throw-away society back then.

I remain in the later camp for when to decorate as I don’t think the Christmas Season should start before mid December – but to each his own. As a reminder, here is how the tree looked decorated. 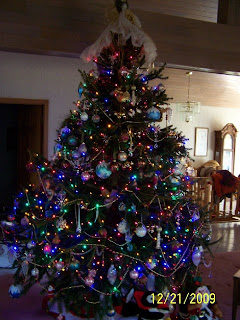 We finally got around to taking our tree down on Jan 8 and I enjoyed the beauty and aroma it provided us for three weeks. I considered just leaving it up as a nice, but rather large, houseplant, but we needed to get our furniture back into some semblance of order. Here it is now waiting to either be drug into the woods or more likely weighted and sunk in the lake as a fish attractor. 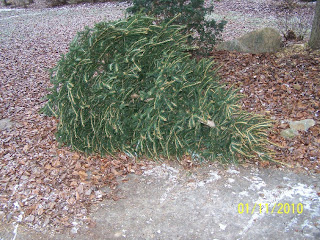 I must admit a little sadness when we took it down, as I still remember being on my hands and knees planting the little feller when it had only two or three branches, so I just wanted to say thanks to it for the pleasure it brought us. I know – kinda corny.

Have a great one and I like to get comments.