I wasn’t planning to blog about this meal, as it was to be just some pulled pork from the freezer, slaw and ABT’s, cooked on the grill – but they looked so good I had to take a shot or two. For you non-barbecuer’s out there, ABT in an acronym for the not so appetizing sounding Atomic Buffalo Turd – no idea where the name came from, but they are delicious. Basically they are bacon wrapped, stuffed jalapeno’s, and the recipe I use is as follows:

ABT
Roxy from “The Smoke Ring” BBQ Forum

- Mix cheese, garlic, rub, mustard, mayo and BBQ sauce together and incorporate well.
- fill each pepper half with mixture and top with a slice of sausage.
- wrap the bacon around the turd trying to cover as much of the turd as you can.
- Use a tooth pick to hold bacon in place.
- cook in the smoker on a sheet of foil for about 45 minutes to 1 hour at about 250 degrees till bacon is crisp. (may take 1 ½ hr to crisp bacon)

They are generally smoked along with whatever else you happen to be cooking, but must not get to hot or the stuffing will run out. The spicy heat in them is a function of the pepper and how good they are cleaned out inside. To cook them in a smoker, just put them on the rack, but I found in my grill and in the time I had to cook them, I needed the two outside burners on full blast and the three inside ones on low. Having bacon over direct heat would have been a giant fire, so I put them on a rack in a jellyroll pan over the inside burners and it worked great. Remember, a smoker is just an oven and a grill can be one too. A close up. 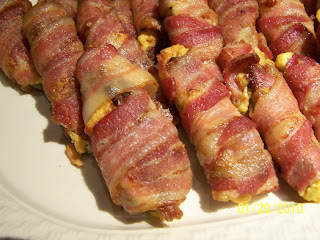 For the sandwich, we just re-heated the meat a little and I used (for the first time) some Gates Extra Spicy sauce, which was given to us by our friends. It was real good, but the heat in the ABT’s made it seem pretty mild. I sided mine up with another batch of Bev’s slaw – she keeps getting better at it and the store bought cabbage is surprisingly sweet. Like her hot dog, Bev added the slaw to the meat and like my hot dog, I did not – danged if I’m going to ruin a good hot dog or BBQ by putting cabbage on it, but that’s just me. Here’s a pick of my plate. 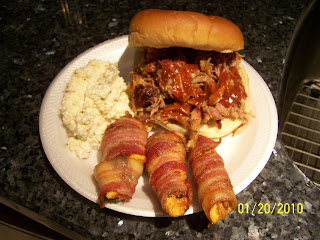 Even though BBQ is one of those things she likes, Alex decided not to eat any tonight, but opted for something else. As we were finishing up dinner, she suggested I should write about her meal as well, so I took this shot, but I'm at a loss for words. She went from selecting the interesting menu for yesterday to: 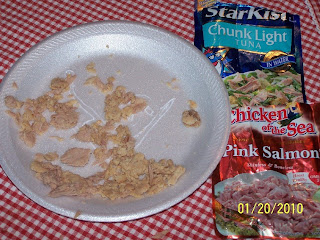 I think calling her finicky in a previous post may not be accurate – weird is probably closer – she’d usually rather have something out of a can or from a fast food joint than the pretty good stuff we cook around here. Oh well, at least she seems healthy and stays thin, so it's obviously working for her - she is rightfully in the eat-to-live category (verses live-to-eat).

Several blogs I read have a picture that is changed regularly in the title box and I like that. Since my semi tecno-geek daughter was here for dinner I asked how how to do it and she said just go to ..., which I did and there it was - add image. So simple even I could do it, sometimes I'm such a dufus. I won't change it daily, but like being able to.