Oysters Rockefeller In The Oven

Bev has been craving our normal crappie in lemon/butter/caper sauce and I have been wanting to try our frozen oysters so we opted for both in the same meal.  We really enjoy Oysters Rockefeller (OR) and have posted about them a few times but this was a first for us as we have always cooked them in the half shell on the grill.  During our RV trip to Florida in Dec/Jan we were shocked to discover that very few oysters were being harvested from Apalachicola Bay but we could buy a few.

Since we wanted to take them home, we bought some pre-shucked ones and froze them with the understanding that they didn’t work well raw but were just as good as fresh-shucked when cooked.

Obviously they could easily be thawed, breaded, and fried but making OR without shells presented a challenge so I went in search of a replacement and found these oven safe oyster dishes at Amazon. 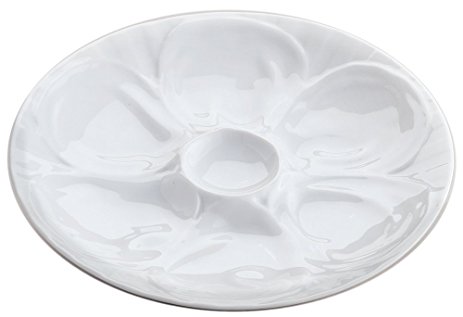 After several dreary days, the sun finally came out on Thursday and we decided to take a drive in the Great Smoky Mountain National Park which surrounds Gatlinburg, TN and you go from mega development into the wilds in just a few feet.  This is the upper end of town using Google Earth to look both ways from the same intersection. 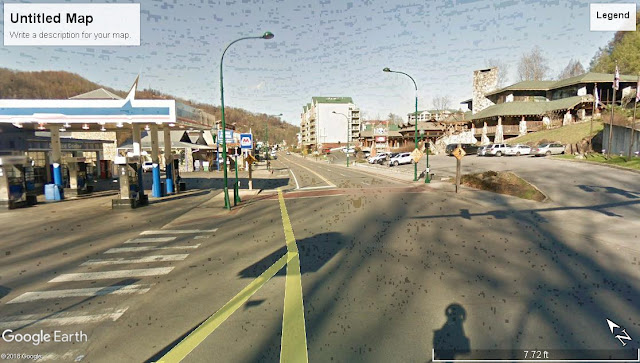 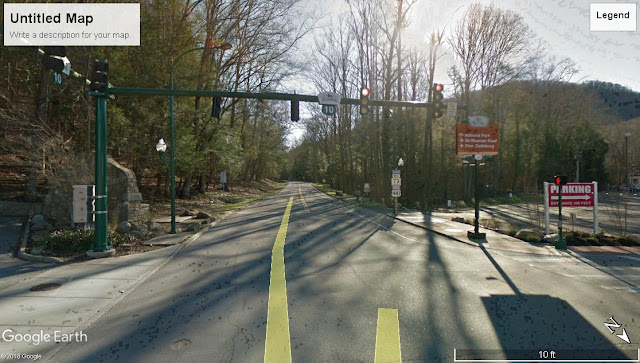 Bev is not a big fan of scallops so I used her being in Gatlinburg as an opportunity to cook up some bay scallops for just me.  We brought the frozen scallops back from Florida in one pound bags so I made two meals of them. 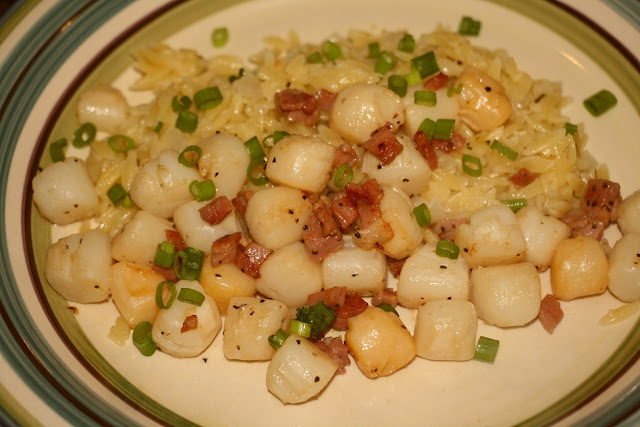 This was the week we visited our time share in Gatlinburg, TN and most of the time it includes Valentine’s Day as it did Wednesday of this week.  As usual, I was there for (at most) part of the week and we timed my part so I could be there to go out to dinner with my Valentine and as it turned out our good friend Kathy joined us.

Before leaving home, Bev mentioned that she had been coming to G’burg her whole life and never eaten at Howard’s Steak House, which has been around since 1946 as an independently owned restaurant – one of the few in town.  After getting up to G'burg and discussing several options, we decided to go with Howard’s even though it didn’t have as high of ratings as some others (3½ stars on Trip Advisor). 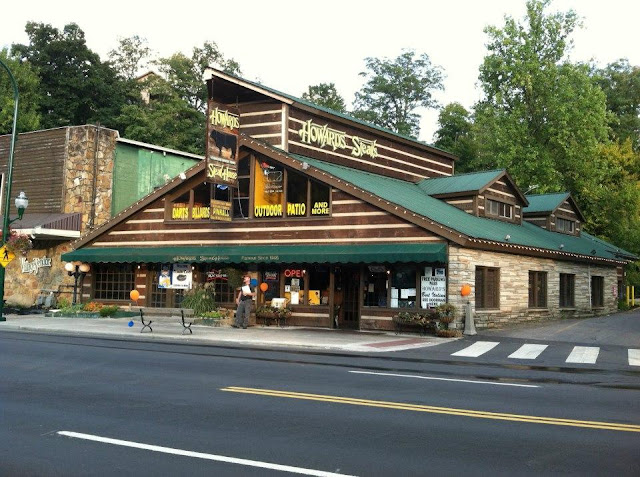 I can’t believe it was 2010 when I last made these and I actually made the ricotta for them that time.  This time, I used store bought ricotta, the same crepe recipe (doubled) and a different filling. 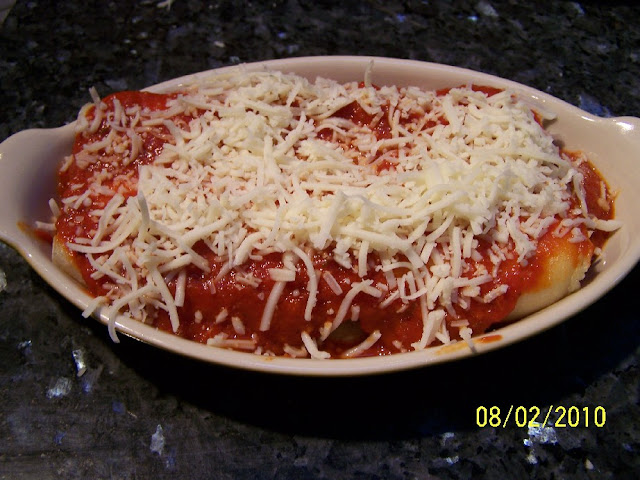 Salmon Poached in White Wine with Olives and Pearl Onions

Since our return from Florida, I have been looking for different ways to prepare the seafood we brought back and I saw Chef Lea Ann’s recipe for Salmon Poached in White Wine with Olives and Pearl Onions on her Cooking On The Ranch blog.  Since I like olives, pearl onions, garlic, and wine, I knew I had to give it a try with a couple of slight modifications – I upped the ingredients for three servings and cooked in individual dishes with 1/3 of the ingredients in each.  Check out Lea Ann's site for the original recipes and some good pics.

Instructions:
1. Preheat oven to 350 degrees.
2. Cut salmon pieces to fit dishes.
3. Pour olive oil in shallow oven proof dishes, and place salmon filet in oil skin side down.
4. Arrange olives, onions and garlic around the salmon.
5. Pour wine over everything.
6. Top the salmon with lemon zest and then squeeze the lemon juice over all of the ingredients.
7. Sprinkle with red pepper flakes and salt and pepper. 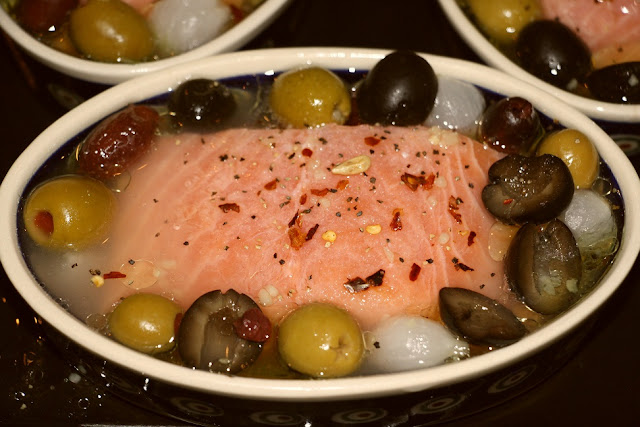 Grilled Eye Of Round With Peas And Carrots & Congrats Philly

When we moved to South Jersey in 1962, I became one of the long suffering fans of the Phillys and Eagles and even though my enthusiasm for them has long since waned, I was happy to see them play such a good game to win the Super Bowl - I'm usually a fan of the underdog as well.  I even stayed up awake for the whole game.

When Cindy came over the next night she wanted to watch the half-time show that we had recorded.  I don't generally care for the commercials (Super Bowl or others) and we didn't watch the halftime show so I watched it with Cindy.  The following comments will likely show my age but what I saw in the show was Justin Timberlake and others jumping around to noise that I assume was supposed to be music and he displayed a very mediocre singing voice - however much he was paid, it was way too much - critique over :-)

Bev bought a packer cut whole eye of round a while back and it has been wet-aging in the fridge for about a month waiting to make it onto the meal schedule – while I’m in a cooking mood, I have about two weeks of meals planned out to use the stuff we have in the freezer and try out some recipes I’ve been saving.

When it comes to grilled meat, my go-to source is Chris over at Nibble Me This and for this meal, I choose his Rotisserie Garlic Roast Beef Wraps and I sided it with peas and carrots.  So let’s begin with the beef using Chris’ recipe shown below and be sure to check his blog for some great how-to pics.

Rotisserie Garlic Roast Beef – Slightly adapted from Nibble Me This

Instructions:
1. Make the paste.  Place the paste ingredients in a food processor or blender and pulse until you get a paste consistency.
2. Prep the beef.  Trim any excess fat off of the eye of round. Score the meat (making small slices on the exterior). Season all over with the salt.  Securely place the beef on the rotisserie skewer rod.  Slather the garlic paste all over the beef.  Let sit at room temperature for 1 hour. 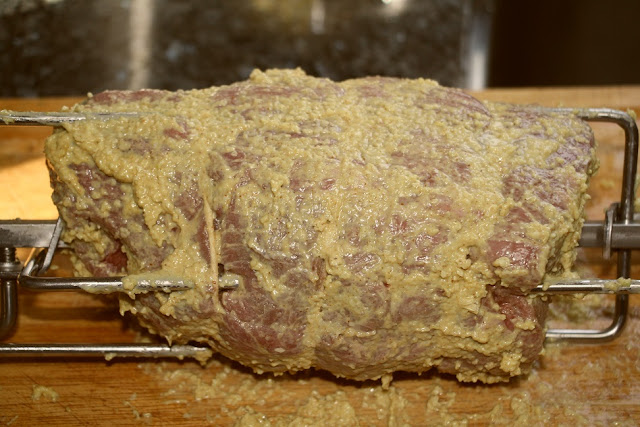 I have been wanting a casserole and when Steph posted the recipe for Monterey Chicken Spaghetti on her Plain Chicken blog, I knew it would do the trick.  Check out her site for the original recipe and some great shots of the dish.  I borrowed this shot from her to show how good it looks. 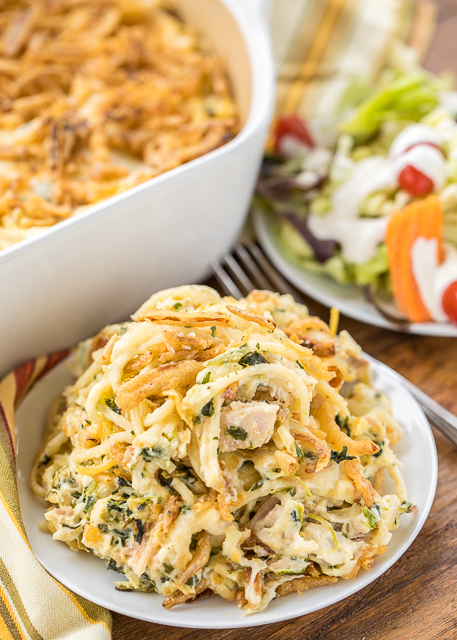 To say I’m not a believer in single use kitchen cooking devices, is a giant understatement as I refuse to buy such things as an omelet cooker, a panini press, a George Foreman Grill, a hamburger cooker – you get the point, believing instead that I can use my good set of pans instead – Bev did sneak in a seldom used rice cooker on me.

Don’t get me wrong, we do have plenty of kitchen gadgets, just not many for cooking – we do have a regular pressure cooker and a slow cooker as they can do things that are difficult or impossible to do in regular pots and pans.  I’m not throwing off on those of you who have these items, but they are not for me, in some part because we don’t have a place to store them.  I say this to say I'm reluctant to add gadgets to the kitchen.

However, there is one non-cooking gadget we recently bought that is quickly rising to the ranks of a necessity.  Since we cook a lot and don’t always have containers for storage, we often use plastic wrap to cover containers.  If you use it, you have likely had it refuse to tear on the non-sharp serrated box edge, or fold back on itself into an impenetrable wad as you try to manage it with one hand.

One morning, while watching the Barefoot Contessa, Ina commented on her Stretch-tite Wrap n Snap 7500 plastic wrap dispenser and despite my reservations, Bev urged me to buy one.  I was not convinced it would work any better than wrap from a box and it would not fit in the drawer where the box goes but after some research and Ina's recommendation, I ordered one from Amazon along with a large roll of plastic wrap. 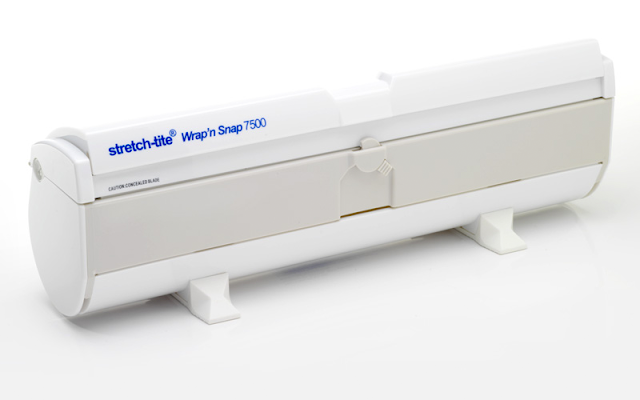 This link is a 45 second You Tube video showing how it works and ours functions as shown.

After about six months, we love this thing and since we use it every day and often several times, it now has its own spot on the kitchen island.  I believe the three things that I like are that it cuts cleanly every time, the new end is easy to get for the next use, and it leaves both hands free to deal with the plastic rather than using one of my hands to hold the box.

I used the thing the other night to cover a couple of two quart measuring cups full of homemade chicken broth and thought “this thing works so good, I should blog about it.”  So if you’re tired of struggling with the plastic wrap, they are $20-25 at Walmart and Amazon plus a large roll of wrap.

Disclaimer: I have no sponsors nor do I allow advertising on my blog and I will receive nothing for this post - I just wanted you to know about this thing.