We had seen Buitoni products advertised and maybe in the store, but had never tried them. After Mary posted about them over on Deep South Dish we decided to give one a try. I looked online to see which local stores carried the products and Bev stopped buy to pick some up. It turned out to be an adventure as neither she nor a clerk could readily find them in Food City. Finally, they were discovered beside the milk in the dairy case and she later saw them in the deli case at Walmart beside their pre-made sandwiches and fresh cheeses – looks like both stores are going to great links to make them hard to locate. Anyway, she ended up bringing home a package of Mixed Cheese Tortellini, which we served with some spicy Italian sausage that we had bought the day before from a butcher shop in Oak Ridge – they make their own. I started out to whip up a quick batch of Tyler’s Pomodoro Sauce by this recipe:

½ cup extra virgin olive oil
1 medium onion, chopped
3 garlic gloves, chopped
2 (28 oz) cans whole peeled San Marzano tomatoes, drained and crushed by hand, liquid reserves
Kosher salt and freshly ground black pepper
½ cup fresh basil leaves, torn into pieces
Heat the olive oil in a large saucepan over medium-low heat. Add the onion and garlic and cook until the vegetables are soft, 4 to 5 minutes. Carefully add the tomatoes (nothing splashes like tomatoes) and about 1/2 cup of the reserved liquid and season with salt and pepper. Cook until the sauce is thick, about 15 minutes. Taste and adjust seasoning with salt and pepper. Bring to a boil, stirring for a few minutes with a wooden spoon to further break up the tomatoes. Reduce the heat and let simmer for 20 to 25 minutes. Stir in the fresh basil and season again.

I used the same basic ingredients, but did a few things differently. First, I used two quarts of our home canned tomatoes and since they have only a little water in them, I only drained one quart, them blended them up in the jars with an immersion blender prior to adding to the pan – I wish I’d invented that tool, it’s one of my favorites. 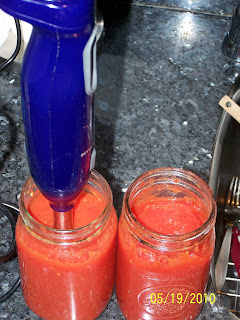 Secondly, after browning in a little olive oil, I added the Italian sausage to the sauce along with a bay leaf – we like the flavor it gives the sauce. 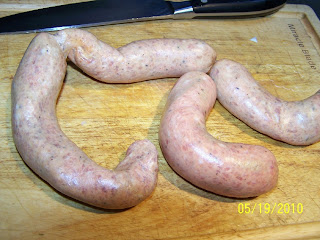 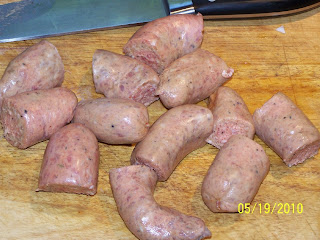 Finally, while mowing the lawn, I drove past the herb bed and the fresh oregano looked too good not to add some of it with the basil. I’m not sure, but it may have become a sauce of a different name by this time – tomato sauce is one of those things I feel comfortable tinkering with.

We cooked the pasta per package directions, plated & topped it with sauce and the sausage, sided with some salad, using bottled Caesar dressing and then grated fresh Parmigiano Reggiano over everything. Bev had some homemade bread that was getting a little dry and turned it into some delicious garlic bread. 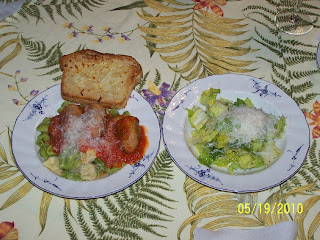 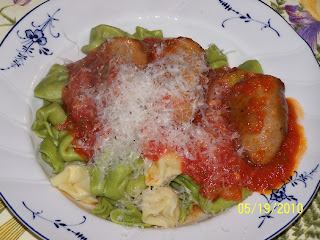 I liked the pasta and if I paid attention, I could taste the cheese stuffing even though the tomato sauce, and the others agreed – we will definitely try some other varieties. The sausage was a disappointment, which is why I didn’t cite the butcher shop. It was not very flavorful for Italian sausage and seemed to have no heat, even though we’d ordered the spicy version. After cooking in the sauce it was moist enough, but the piece I ate after browning was very dense and pretty dry, indicating not enough fat for my liking. We usually make marinara sauce, including some sweet peppers, using several dried spices and cooking for a few hours, but I liked this and will make it again. All-in-all, a pretty good meal for not a great deal of effort – and as good as most Italian restaurants serve.

Thanks for stopping by and have a great day.