Breakfast From The Frig

I had a couple of leftover items in the frig and for breakfast, I decided to work toward using them up. Fortunately, the meal included three of my favorite things: eggs, potatoes, bacon (even though it was the Canadian version). So it was some leftover smoky paprika home fries & Canadian bacon both reheated in the microwave along with a couple of plain ole moist scrambled eggs. When I was a kid, one of my very favorite breakfast meals was Grandma's scrambled eggs (always moist and gently folded into big fluffy curds) and a piece of toast - and it's still a favorite. 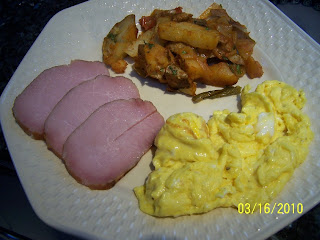 It took me awhile, but I finally figured out the slit on the top piece of bacon is from the meat probe I used when smoking - looks like I did pretty good getting it in the middle. 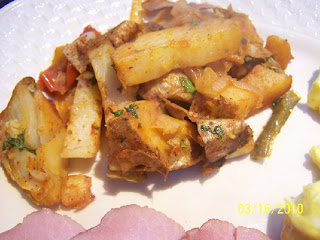 I’ve decided I prefer boiled potatoes for home fries, as they are not as dry as these baked ones turned out to be.

Alex (the granddaughter) has one trait that I really wish I had. Not only is she a picky eater, she, also, just eats to live and as such, she’s nice and slim. Whereas I eat pretty big, frequently fattening breakfasts, she usually just has a bowl of cereal – although it’s something sweet (sweets are her weakness). We ran out of cereal, Fiber One bars, and pop tarts this week, so she went with her third fallback meal – cinnamon toast. I remember eating it regularly as a kid, to my great enjoyment. To make it quick and easy, we keep the sugar/cinnamon mixed in a shaker. I think we mixed it ¼ cup granulated sugar to 1 tsp ground cinnamon. She doesn’t like a lot of butter, so we just use enough to ensure the sugar/cinnamon sticks. 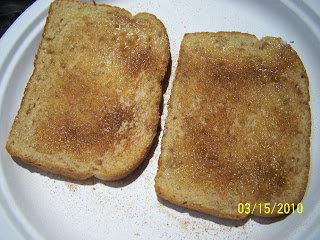