Bev wanted to make crab salad and actually prefers imitation crab to what we can get canned (we don’t agree on everything) and we didn’t have any king crab in the freezer to use. So prior to making a normal crab salad with the imitation crab, we decided to use some of it for a version of Crap Louie to go with some grilled steaks for dinner. For the strip steaks, which we knew were a little tough, we used the jaccard, then marinated them for a couple of hours in Italian dressing, and grilled them on the charcoal grill - I'm usually in too much of a hurry to fire it up. 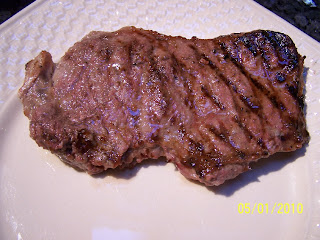 For the Crab Louie (our first ever), I looked at several recipes and concluded, first of all, that the dressing is very similar to 1000 island – Wolfgang Puck’s recipe even calls for it – and since we have a fresh batch of our homemade dressing , we decided to use it. The other thing I concluded is that it is basically a bed of lettuce with crab and assorted goodies around it, such as, tomato, eggs, cucumber, avocado, asparagus, olives, onions with the dressing on the side. So here is our recipe for three salads:

The biggest decision was how big to cut things. Bev wanted her’s cut up in smaller pieces, but I decided to see how pretty I could make mine and larger pieces generally seem to look better. So I just arranged everything as best I could, added S&P and a dollop of dressing and it was delicious – next time I’ll use real crab for mine though - and there will definitely be a next time. 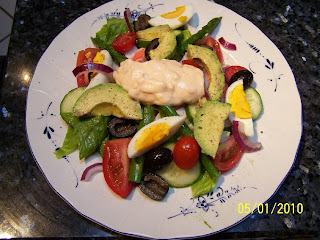 Since we made a pretty big salad, we didn’t have any other sides with the steak except garlic bread, and I was still stuffed - we all thought it was a delicious dinner.

But what about the strawberries you ask? After a couple of hours I was able to choke this down. 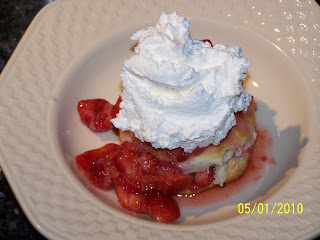 The cake is White Lily Biscuit Mix with the addition of sugar and shortening (Bev uses butter) and it makes a real good and easy shortcake.

Have a great day and thanks for reading.