My daughter Wende works in Oak Ridge, which is little less than an hour from here and we’ve been planning to go over and have lunch with her for over a month – but for one reason on another we didn’t make until this week. We went to a little ice cream parlor that also serves a light lunch named Razzleberry Ice Cream Lab.

We each tried a different sandwich – bacon bacon BLT, muffuletta, Bavarian pork, and homemade smoked polish sausage and they were all good. It’s somewhat of an interesting place - an ice cream parlor serving lunch is fairly normal, but serving homemade smoked sausage didn’t fit as well. When I glanced around and spotted the meat case full of European style sausages, that didn’t fit at all.

So after lunch when the girls headed toward the ice cream, I strolled over to the meat case and the owner happened to be waiting on me. When I asked about the meats – cappicola, mortadella, head cheese, and many others, she told me the story. As new residents in the US, her kids, who grew up on these products, were concerned about what they would eat in East Tennessee, so mom needed to order them to feed her family and decided to offer them to the public as well. They all seemed to be the real thing and the cappicola labeling was in Italian. After ordering up a pound of it, I studied the head cheese which I had read a little about, but had always been afraid to try, based upon what I believed it was made from. She advised this was made with meat gelatin, beef tongue, and spices. As I hesitated, she said here try a little piece and to my surprise, I thought it was pretty good. I actually bought a few slices to bring home for a sandwich and for the others to try – but I doubt they will.

I did a little research and according to Wikipedia, head cheese in general “is not a cheese but a meat jelly made with pieces from the head of a calf or pig (sometimes a sheep or cow) in aspic. It may contain onion, black pepper, allspice, bay leaf, salt, and vinegar. It may also include meat from the feet, tongue, and heart. It is usually eaten cold or at room temperature as a luncheon meat.” It also varies greatly from country to country and this is what it said about Polish versions – “In Poland, head cheese is referred to as salceson, a name possibly derived from saucisson, the French word for a type of sausage. There are several varieties of salceson which depend on the ingredients: Black Salceson which contains blood, White Salceson made with a mixture of seasoned meats without blood, and Ozorkowy (Tongue) Salceson where the major meat component is tongue,” so I guess this last one is what I have. Like many old time meat products, I assume this one was invented to be sure very little of the animal got wasted - this using the gelatin and tongue.

For dessert the girls all had a scoop of their homemade ice cream and all testified to it being delicious.

So I’d have to rate this trip a success – a good lunch, a visit with Wende, and a source located for cappicola and other European meats. We also checked out a real butcher shop (hard to find around here anymore), which is highly regarded in the area for their meat, and learned they were a source for whole dressed pigs for when I want to BBQ one – I’ve asked at several places and this is the first one to say they could get one. They also make their own sausage in several varieties, so we bought a few links of hot Italian for an upcoming Italian meal.

Followup:
So I made a very basic sandwich from headcheese the next day for lunch using just the meat, a slice of chilpotle jack cheese, and some mayo on wheatberry bread. When I opened the package, it smelled a lot like liverwurst and I thought it had a similar taste - makes me wonder if it's made from tongue. I thought it made a good sandwich with the only real oddity being the texture of the gelatin. I don't think I'd make a special trip to Oak Ridge to buy more, but if someone said they were serving me a head cheese sandwich for lunch, I'd say "sounds good to me." 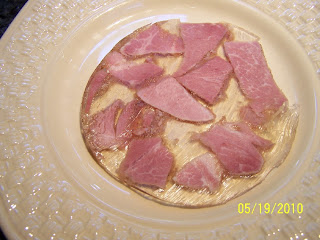 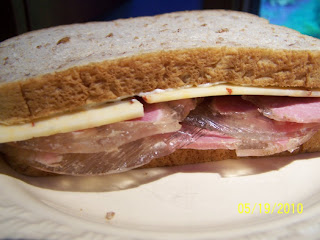