When I was still working, we occasionally went to the nearby Shoney’s for lunch and after trying many of their offerings, I decided there were only two things I really liked – onion rings and strawberry pie. Thereafter, when we went there, I would order those two items as my lunch. I had them bring the pie immediately and ate half of it as an appetizer while I awaited the rings. I then ate the onion rings as my entrée and the other half the pie for dessert. I haven’t been to Shoney’s for at least a dozen years so have no idea if it’s changed but thanks to the miracle of the internet, I’m able to enjoy their pie (or a clone) at home. Bev asked me to see if I could find a recipe similar to theirs and so a search on “Shoney’s strawberry pie” turned up the following recipe. The one thing I would have changed at Shoney’s was their use of whole berries, so Bev halved hers lengthwise – gets more berries in the pie. Without a side by side taste test, I couldn’t say it tasted exactly like I remember, but I believe it was real close and Bev liked the simplicity of it. 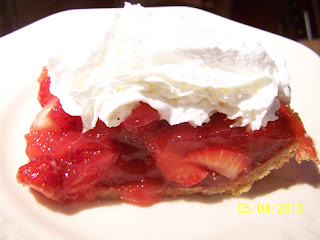 It sure went down easy and we're having as many strawberry items as we can while they last, because as I've said before, I'm spoiled and refuse to eat the picked green, tasteless ones out of season.