I had a big day planned so I decided to start off with a substantial breakfast while Bev gets her beauty sleep - I had an early date at the church garden I'm helping with. We’re still getting some asparagus spears and had a few in the frig so I decided on a quickie omelet sided with some buckboard bacon and sautéed cheese grits.

For the omelet, I cut up the asparagus and a slice of Vidalia onion (we just received as a gift from friends who had recently passed through the Vidalia area), and sautéed them in a little olive oil. While they were cooking I diced up a little cheddar and pepper jack cheese and beat a couple of eggs with a little half & half.

I put the bacon on first so it could shrink and render some fat. Then I added a couple of 1/2" slices of the cheese grits leftover from the other night. I made the grits more for this purpose than for the original meal. 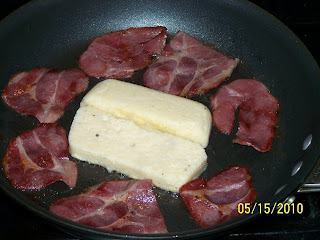 When the onion and asparagus were crisp tender, I removed them and added the egg to the pan. When I had the top pretty well set, I spread the veggies and cheese on one half, folded it over and had a delicious and fluffy omelet.

Here’s my plate and it was an outstanding way to begin the day. 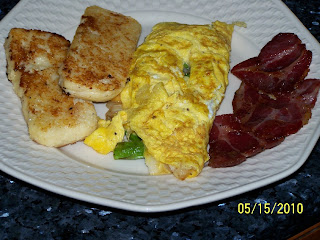 Oh I did decide to have a light lunch to tide me over until supper. Our neighbor picked the berries and provided the crust (her recipe makes two), so how could Bev not make a pie. She used Mary's recipe from Deep Souh Dish, and I believe the 7up does make it better than the water in the previous Shoney's copycat we used. 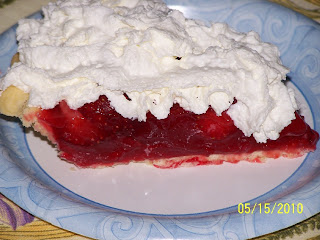 Finally some springlike weather this week with temps in the 70's/50's and some rain - I like it. Hope you have a great day and thanks for stopping by.