We had a top round roast in the freezer that needed to be cooked and we wanted to cook a crock pot meal – so we matched them up. I realize this is a pretty lean cut of meat to cook all day in the crock pot to almost falling apart, but that’s the way the Boss likes it and she did the cooking. She seasoned with salt, pepper, and Tiger Seasoning, added 2 cans of cream of mushroom soup and 2 cans of water, a packet of Knorrs onion soup mix, some carrots, celery and onion and later some mushrooms. When it was about three fourths done, I sliced it into half inch slices and let it cook a couple more hours. It turned out very similar to country steak and gravy.

I was going to make some mashed potatoes for all that gravy, but I’d been wanting some cheese grits for several uses. So I made up a batch using 2 cups of quick grits, 4 cups water, 4 cups milk, half a stick of butter, 8 oz. of cheddar cheese, and S&P. Some of the leftovers went into a bowl, but most went into a bread pan to set up for slicing. 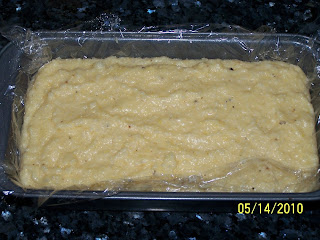 Here’s my plate of serious comfort food and it was very good, not to mention easy. 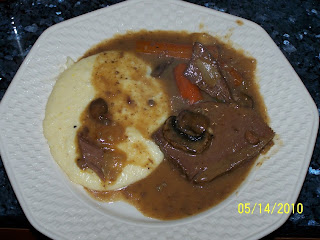 I can feel several meals coming-on from both the leftover beef and the grits, and the freezer is getting increasingly emptier.

Have a great day and thanks for tuning in.