A while back, I was watching one of my favorite food shows, Bobby Flays Throwdown, on the Food Network. The particular show was a Philly Cheese Steak Throwdown – one of my very favorites after living in South Jersey for seven years. For his sandwich, Bobby made a provolone sauce rather than just use cheese and the whole thing sounded like the makings of a pizza to me.

So for this meal we pretty followed his recipe for everything and used some pizza dough we had in the freezer. To kick them up a notch, we did them on the grill, which is our favorite method – each step with the grill lid closed. This is a repeat, but we cook the first side on medium until it is golden brown, then flip it and cook the bottom just enough to keep it from sticking to a cutting board.

I also separately sautéed some thin sliced strip steak, sliced cremini mushrooms, and julienned sweet pepper and I caramelized some onions. Didn’t take any pics as it would just have been these items cooking in a skillet. The steak sandwiches I remembered had meat, provolone cheese and grilled onions, so the peppers and mushrooms were a bonus on the pizza. Here’s the finished product - we decided at the last minute to toss on some additional cheese and it was already sliced. 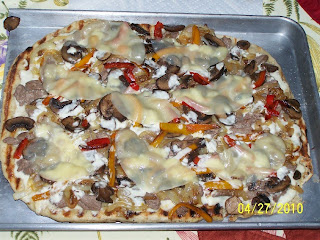 I believe it needed more meat and less or no mushrooms – while they were good, they took away from the traditional cheese steak taste. The report is (notice how I generally tell you how we liked things), it was a good idea to try it, it was a good pizza, but we all like a Philly cheese steak sandwich better. I think I’ll try it again on a tortilla to keep it small and simple and begin with just a little red sauce, then lots of meat, peppers, onions and shredded provolone on top. Of course, I'll let you know if I try it.

Thanks for stopping by.