I watched Ann Burrell (Secrets Of A Restaurant Chef) make this dish on the Food Network the other day and knew I had to try it. She described how she had learned to cook it either in a restaurant or cooking school in Italy (or maybe both, can’t remember for sure). When eating pasta with tomato sauce, I generally prefer my meat shaped like meatballs or sausage rather than in the sauce, but since it looked so good and meat sauce is Bev’s favorite, it had to be cooked. I won’t reprint the recipe here as it is pretty long, but it can be found at this LINK.

I can’t remember cooking one of her recipes before, but since I like the way Ann cooks and she seems to know what she’s doing, I followed the recipe as closely as I could until close to the end. The prep was quick and easy, which I liked, and I think the initial cooking process up to simmer took about an hour of pretty continuous attention. I was surprised at how flavorful it was with only the browned meat, veggies and salt. Once you get it to the simmer stage, it requires only an occasional stirring and a few water and salt additions. I also added some black pepper, dried basil, oregano, and crushed red pepper the last hour to achieve a flavor we liked a little better. While Bev was shopping for the ingredients she called to confirm I wanted 2 cups of tomato paste and not 2 tbsp as might be more normal for a recipe. She advised she'd never heard of a recipe that used so much tomato paste. This is the sauce simmering away. 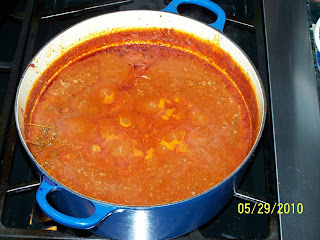 Here it is in the pan ready to plate up – we used angel hair pasta, as that’s Bev’s favorite. 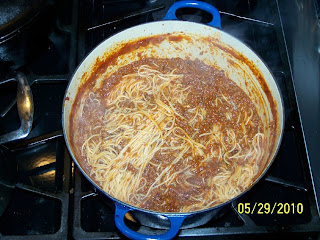 Plated with the addition of some fresh Parmigiano-Reggiano - we prefer it added to the plate rather than the pot. The plan was to have salad with it but the salad maker got busy with laundry and forgot and I’m glad as it left room for a second helping. 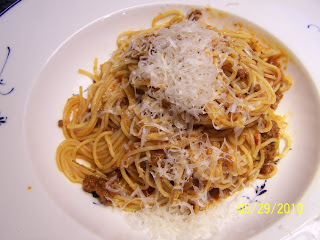 As much as I enjoy a glass of red wine, I'm not normally a fan of dishes made with it, and I even considered using less than called for here, but I plunged ahead and glad I did as it sure works well here. This is a definite keeper recipe for us – even Alex, the anti tomato sauce person, liked it, and ate two servings - as did everyone. Bev really liked it, as did her sister, so I was a hero today thanks to Ann Burrell. If you like meat sauce, I can’t imagine you wouldn’t like this.

Larry’s eating instructions – don’t roll it on your fork like regular tomato sauce, or all of the meat will end up left in to bowl (or plate), but rather cut it into bite size forkfulls and be sure you get the meat with the pasta :-).