The dock is ready for the official opening party and the blogger get together.

It’s easy to get into the habit of preparing the same basic things the same ways without digging out other options. To help with this, Bev and I have decided to try to eat one of each of these every week – Fish/seafood, Mexican, pasta, southern/Cajun/low country – granted, we’ll often get a twofer in one meal. I didn’t include BBQ because it will be used in many of the others, like this meal.

I’d put a bag of delicious pulled pork in the frig from last Wednesday’s BBQ day and had planned to turn it into pork enchiladas with green sauce. But after seeing Enchilasagna over at No Excuses BBQ, we decided to use this assembly process and the planned Emeril recipe as it matched up with the ingredients we had on hand – can of salsa verde, opened can of chicken stock, queso fresco, etc. I ended up only having 1 ½ pounds of pulled pork so I went freezer diving and came up with another pound. I made the dish in a small enough pan to ensure I had enough filling for two layers. I let the meat warm to room temperature and the onions to cool to room temp prior to assembly and I used a whole pound of Quesco fresco in the stuffing. Here are a few shots of the process. First added a thin layer of sauce followed by tortillos and the stuffing. 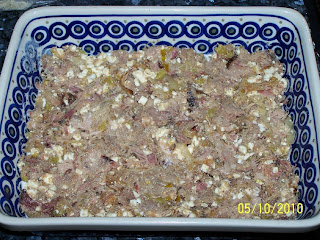 Then a layer of sauce. 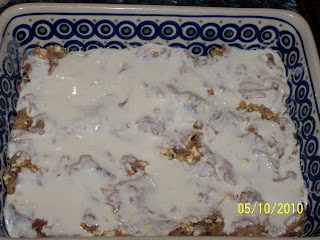 Then repeat and end with a layer of tortillos topped with sauce. 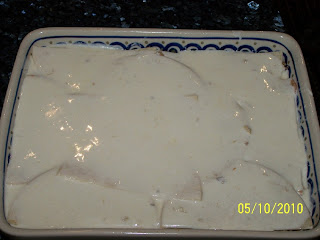 I added some chopped ripe olives and cheddar cheese to the top when it was almost done – can’t get too much cheese you know. After pulling from the oven I added some fresh chopped cilantro, sliced ripe olives, and home canned jalapenos. 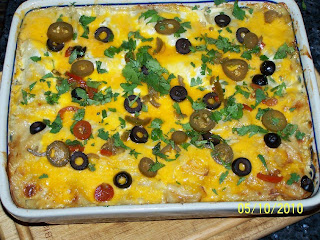 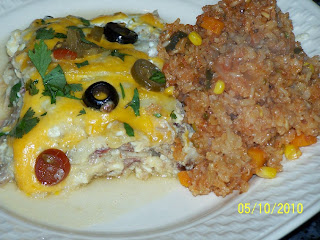 We all thought the dish was delicious and the only negative I saw was the amount of liquid in the dish bottom. It may take another time or two to get the liquid just right and we’ll definitely make this again. I had four cups of sauce and could have gotten by with less – maybe omit the chicken stock next time or cut it in half.

I wanted to have some Mexican rice and Bev agreed to handle that part of it using a recipe from the internet. She followed the directions but added some chopped green Anaheim chile peppers we had in the freezer and some mixed vegetables, as that’s also what we had in the freezer. Her additions were not enough to overcome a recipe we didn’t care for. I have one more Mexican rice recipe to try as we search for one we like.

All in all a good meat and a delicious enchilasagna – I even had it leftover for breakfast and lunch the next day. Since we’ve never been able to get regular enchiladas out of the pan as whole units anyway, this worked perfect for us. Thanks zydecopaws for a great idea.

Of course we started the whole cooking process with a little libation to set the mood - Bev's is pink due to a splash of guavaberry liqueur. 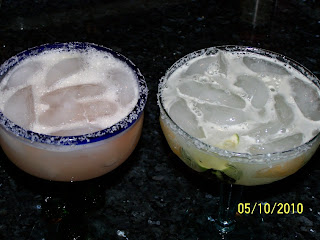 It was around 90 here yesterday - wow - I'm not looking forward to August. Have a great day and thanks for stopping by.