A BBQ Plan That Works Well For Us

I had several orders and ended up cooking two days for a recent BBQ day. The first day, I did brisket, pork butt, ribs, and a leg of lamb. The second day I started the smoker at lower temps to cook Canadian and buckboard bacon, then cranked it up to 300* to cook some chicken and a stuffed pork loin for some friends.

These friends just don’t cook to any degree (neither of them) – I think they know how but they just don’t enjoy doing it, but they like BBQ, and I like to cook BBQ. About every second or third time I cook, I get a big order from them, which they freeze and eat on until it’s gone, then place another big order. For this cook the stuffed loin, all of the chicken and some of the pulled pork were for them. Since everything for both days, but the bacon and stuffed loin were just my standard fare, I didn’t take any pics of them.

For a stuffed loin, I keep using different things based on what we have on hand. For this one, I used some onion, roasted red peppers, roasted Anaheim chili peppers, spinach, some diced buckboard bacon and sautéed them in a skillet we’d just fried the bacon in. I meant to add some grated parmesan but forgot it – just another senior moment. Here’s the stuffing in the skillet. 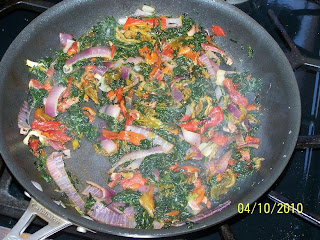 Here is the finished product and Bev and I both loved the stuffing combo. I had to tress it good to keep the stuffing inside. 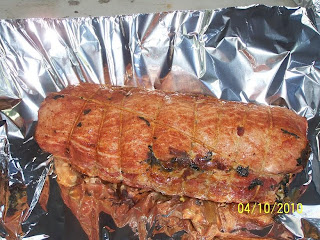 A sliced photo just looks like a loin with a green swirl in it and the main purpose for this discussion is to suggest you may want to consider this stuffing – maybe remember the cheese, or some garlic or some cilantro for next time - I believe a Tex-Mex one for next time sounds real appealing.

Here’s their order ready for the freezer - should last them awhile and, based on my sampling, it all turned out delicious. 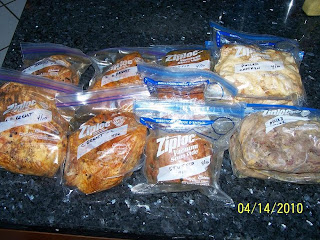