The Knockout Roses are starting to show off.

Wednesday was BBQ day at Almost Heaven South and I qued up a variety of my normal items – 4 butts, 2 briskets, a pork tenderloin, 4 chicken breasts, 20 jumbo wings, 3 slabs of baby backs, and 3 tubes of breakfast sausage – none of which I took pics of. In addition to this stuff I also did a real nice choice boneless rib eye which I cooked to an internal of 125*. The customer can now reheat it in the oven to about 130* let it rest and end up with a nice medium rare roast. This is the first one I’ve done that was not eaten immediately so I’m anxious to see how it turns out – it sure looked good. 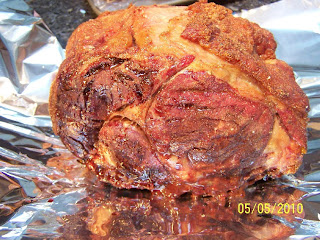 Beverly had said something about smoking some jalapenos and I assumed she wanted to make chipotles, but as it turns out she wanted ABT’s – this was the first time we ever made them because she wanted some. I may have posted this before but we use a filling recipe from Roxy via The Smoke Ring BBQ Forum.

- Mix cheese, garlic, rub, mustard, mayo and BBQ sauce together and incorporate well.
- fill each pepper half with mixture and top with a slice of sausage.
- wrap the bacon around the turd trying to cover as much of the turd as you can.
- Use a tooth pick to hold bacon in place.
- cook in the smoker on a sheet of foil for about 45 minutes to 1 hour at about 250 degrees till bacon is crisp. (may take 1 ½ hr to crisp bacon)

Bev had bought some pretty big peppers, so she filled them, added 1 ½ little smoky sausages on top, and wrapped them in some good Benton’s bacon. The bacon was a little thick for this job, but they turned out ok. It’s best to use a thinner bacon and almost completely enclosed the pepper with it. This will hold the filling in and won’t result in overcooking the inside stuff to get the bacon crisp. I didn’t get a pic but Cowgirl Jeanie just made a big batch and ours looked about the same. LINK