I’ve not eaten jerk meat more than a time or two and don’t remember being a big fan. Since I had the same opinion of blackened, but have changed my mind, I decided to give jerk another try or two. I found this recipe on line at LINK and decided it sounded pretty good.

1) Put all the ingredients in a blender and whiz until smooth.

· Spice Blend
· 2 lbs. of chicken pieces (I always encourage people to use legs and thighs, but breasts will work as well)
· Lime for garnish

1. Place chicken in a large freezer bag and pour in spice blend. Place in a bowl to make sure there isn't any leakage and refrigerate for at least 4 hours, but up to a day is preferable.

I had planned to make the marinade up the day before but I was missing a key ingredient until the evening, which was past my regular work hours and would have thrown me into overtime. So I made it up on cooking day and had the chicken in it by 8:45am, so it got a 9 ½ hour soak and I flipped and massaged it half way through. The recipe calls for 2# of chicken, but I used 6# of mixed thighs and breasts and easily had plenty of marinade.

I cooked it on the gas grill, as I needed to use the side burner for another dish. I grilled it over direct heat on both sides until the skin looked right then moved it to indirect until it got to an internal temp of 165* in the breasts and 175* in the thighs, knowing they’d go up another 5* while resting. 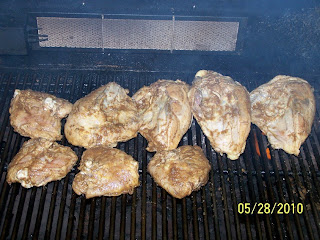 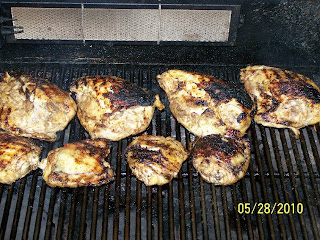 Heat oil to 365 degrees F in a heavy medium saucepan. Carefully add the plantains, in batches as necessary, and fry until golden brown, about 3 to 4 minutes. Remove with a slotted spoon to a paper towel-lined plate to drain. Immediately sprinkle with salt and cilantro, if desired. 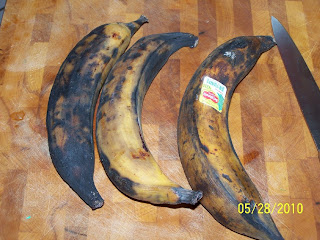 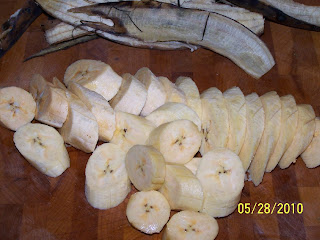 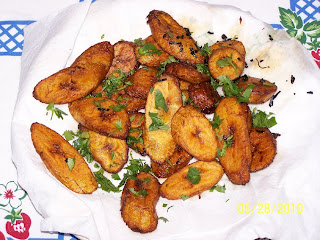 The other side dish was mango pineapple salsa which Bev made generally by this recipe from Ellie Krieger of the food channel – which means she didn’t actually measure anything.

She used a Serrano chile and added a couple of pineapple slices and some sweet red pepper. And like last time she used a splash of Ken’s Steakhouse Raspberry Walnut Vinaigrette in addition to the lime juice and it was delicious again. Here's my plate and I actually ate another thigh, which would have made my plate look better had I gone ahead and added it. 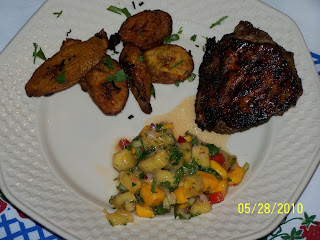 This was our first time to ever make jerk anything or fried plantains and I enjoyed both of them. The two chile's I used didn't make it very hot which was good for this crowd - Bev and I would have preferred spicier but the others would not have.

So, I'm pleased with the first time out and can now look for ways to improve on it. According to Bobby Flay Vernon's in NYC has the best Jerk Sauce in the USA and I may give it a try for comparison.