One of my favorite newspaper reads is humorist Sam Venable’s column in the Knoxville News Sentinel. Usually he devotes the entire column to one topic, but often he does short coverage of several topics. I find I often prefer the multi-topic columns best and so that’s what I’m doing today – truly some eclectic ramblings.

Thanks For Reading
I notice I have two new followers and comments from some other new readers and I just want to tell all of you how flattered I am that all of you take the time to read my ramblings. Seems as most blogs are about something in particular, eg – BBQ, farm life, gourmet food, etc., but I want mine to just be “what’s going on around here today.” It is heavily slanted toward food as that’s something we do everyday and we try to do it well. So thanks for stopping by and thanks for the comments.

The Joys Of Parenting
There’s not much happening around here today. Alex is home from school for the third day with a stomach ailment. We don’t know if it’s a mild case of the flu or just a stomach bug, but since she prefers to be in the living room, where my computer and I are located, I’m getting caught up on the “SpongeBob” cartoons I’ve been missing out on and trying to avoid catching her ailment.

Chicken Prep
I posted this info as a comment in another blog and know some of you have done an item on spatchcocking – butterflying - a chicken on your blogs, but thought I’d post here in case some of you missed the others. This is a link to a good video for the process- .link According to a recent discussion by chef Wolfgang Puck, this preparation method is the key to moist evenly cooked chicken - http://abcnews.go.com/GMA/recipe?id=8603573 .

Cast Iron
I cleaned up and re-oiled the cast iron dutch oven from yesterdays cook and can’t tell you how hard it is not to fill it full of hot soapy water to scrub all of the grease off. My mom always used cast iron skillets and washed with soap, but they may have been in the family for generations and there was no way to scrub down to the metal without sandblasting.

Photography
One of the things I’ve figured out after blogging for 2 months is that a lot of photography is usually involved and, while I was into it in my 30’s, it’s been awhile since I tried to take good pictures. I’m even contemplating finding the book for my Kodak Easy Share and seeing what all it will do besides point and click pictures. I know it will do videos because the 11 year old did it. Not only do I not know how, I didn’t even know it would do that. Anyway, today for the first time ever, while mowing the grass, I rode around with my camera around my next taking pictures – and I enjoyed it – and I got a couple of nice shots. Here are a few of them. 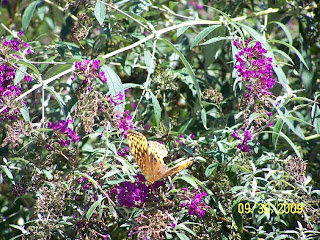 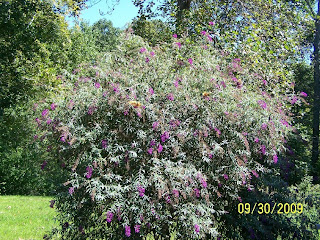 The snowball bush seems to have forgotten what season it is. 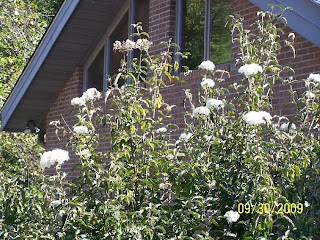 Who says veggies are just for eating. Here are a couple shots of a black pearl pepper (ornamental but still a pepper) and it would be hard to find a prettier plant. I do a little presentation for garden clubs on using veggies to get an early spring start in the flower garden. Later in the fall I'll try and remember to post some of the pics. 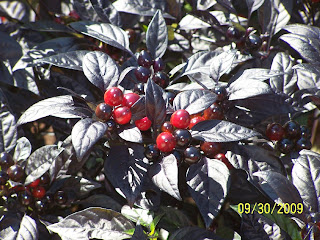 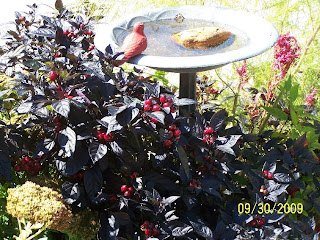 The okra and maters have done there job and are fininshed for this year while the other things are also done or ramping down quickly. 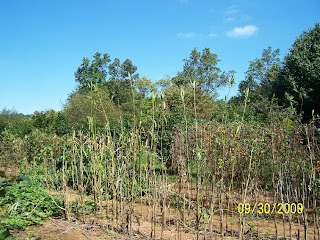 Lot's of new growth on the blueberries holds the promise of another bountiful crop next year. 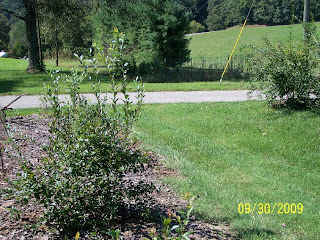 We like to have a live tree at Christmas but won't do it for just the two of us. But since we have an 11 year old in the house, it will be a live tree year. My daughter planted several 7-8 years ago for cutting and here is the one for this year. After a little shapping it will make a beautiful tree. 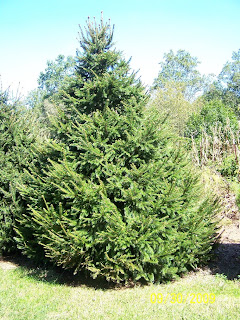 I took several more, but will save them for tomorrow or the next day
Posted by Big Dude at 3:42 PM