We ended up getting 7 inches of rain this past week, which pales in comparison to what they got south of us, but none the less a significant rain event. Here’s the same view, as posted Saturday, on the day after the rain. 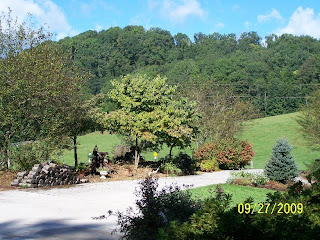 We live on a TVA lake and it is used for flood control, so it often holds extra water after heavy rains. Here are a couple of pics from our dock. At normal summer pool level the ramp from the fixed platform to the floating dock is level to slightly downhill. During the winter it goes down about 6 feet to the dock, but today it is running uphill about 2 feet. Floating docks don’t work well in high boat traffic areas with lots of wakes but we’re in a small dead end cove with only the occasional fisherman. I know - that's an ugly color for a shed - it was supposed to be a green shade. 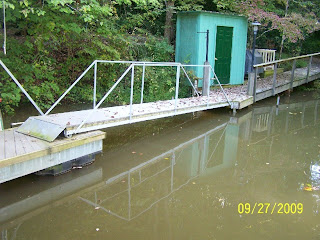 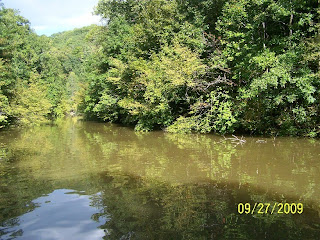 Even more revealing are pics of the fixed docks. The first one shows Alex standing on the fixed ramp to a floating dock with the top at water level. 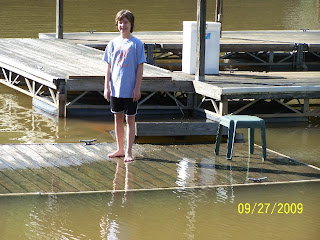 This is a fixed dock where the water is within 6-8 inches of the deck level. 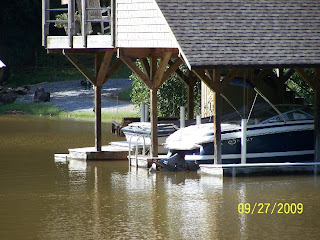 We had a similar situation several years ago and while touring around on the boat, found several folks sitting on their docks which were an inch underwater and totally unseen from our angle. They appeared to just be sitting in their lawn chair on top of the water. Unfortunately I did not have the camera along.

The silver lining - I believe we're out of the lawn and garden watering business for a while and the water shortage in North Georgia should be about, if not totally, erased.
Posted by Big Dude at 8:13 AM