I bought some new cast iron cookware in the spring, with the idea of expanding my cooking repertoire, but couldn’t get motivated to launch into it during the hot summer months. Now that fall has arrived and the weatherman is predicting a 68* day, I believe it’s time. We had a nice big chuck roast in the freezer that needed to be eaten and since well marbled chuck is pretty forgiving, it seemed like the logical first choice. While I’ve cooked with cast iron all my life, I’ve never actually used it as an oven.

After trimming the roast, I added a light coating of Worcestershire, then some steak rub and salt and a dusting of flour, then off to browning. I had the oven heating but didn’t have enough coal going to get the temp I wanted. I then didn’t start the next batch soon enough, but I finally got the meat browned, added a layer of sliced onions to the bottom for the meat to sit on and then some McCormick au jus mixed per pkg instructions- about 11:30am. 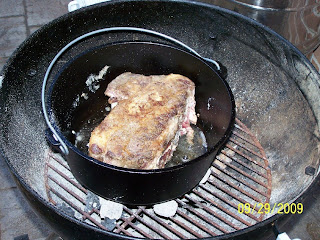 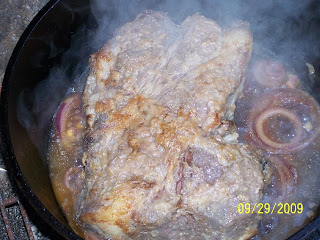 Here’s my set up. I used the grill, as I didn’t have a table, with hitting the grill rack wires with the cooker legs being the only issue. I’ll get a piece of sheet metal for the next time. I started off with 6 bottom and 13 top coals, but it was cooking pretty hard and I was afraid the meat would be done too soon (dinner at 6pm), so I went to low and slow mode with 5 on bottom and 10 on top. It took me a couple of times to figure out how to best get the charcoal ready the fastest. 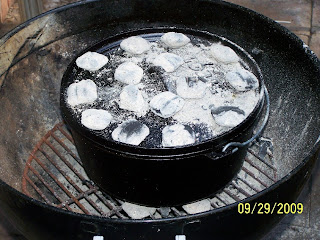 I haven’t used Kingsford briquettes in years and as a barbecuer, I’m used to cooking with wood in my offset or good lump in my Stumps. But, sitting out there while the charcoal was lighting brought back memories of my childhood days when the winter air hung heavy with the aroma from coal burning furnaces. – can’t say I miss it.

Sometimes my wife is way too logical. She wandered up while I was waiting on the charcoal and asked why I was doing this. She pointed out that I moved from an offset to a Stumps smoker so I wouldn’t have to tend the fire so much, yet here I am tending the fire when we have a perfectly good oven sitting in the kitchen that will produce the same results. I’m an engineer by training, but sometimes I hate logic. It took me three hours, but I finally gave her my answer. “I’m practicing for that day when the power is off and we have no propane for the stove or grill, but we do have a bag of charcoal in the garage.”

I went to flip the meat at 2:30 and checked the internal temp. It was at 206 and the probe went in like butter – obviously done and not cooked as slow as I thought. So I added the first veggies (carrots, onions, beans) to the pot and tented the meat with foil and covered with 3 towels. I needed more coals ready at this point to overcome all of the cold veggies I added. I need to learn to think 20 minutes ahead for this process. Added the potatoes and celery at 4:00pm and some corn starch at 4:30pm and the meat back in at 4:45pm. 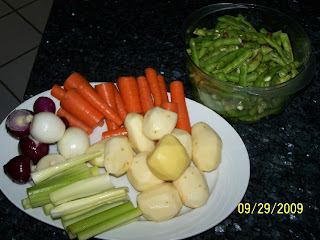 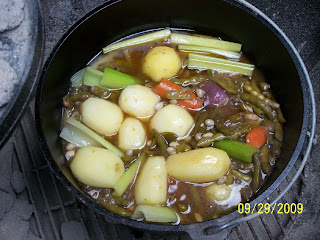 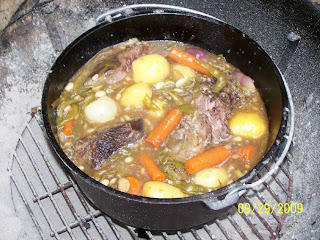 Here's a shot of the plated veggies - think I needed a little bigger platter. 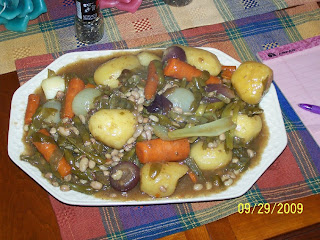 Here's my plate - considered biscuits but decided on a slice of homemade bread instead. 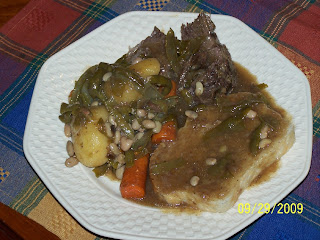 All in all it turned out real good. Next time I’ll break the meat into big chunks, de-fat it and put back in the pot as it could have been more tender. I’ll also use some herbs, which I meant to do but forgot. For the first try, I’m pretty pleased.

One thing I’ve learned today is like BBQ, D.O cooking is all about fire management and practice is required.
Posted by Big Dude at 6:18 PM