If I could eat only one meat for the rest of my life it would be good, crispy bacon – which helps explain my size and daily dose of Lipitor. As a kid, bacon was always fried in a skillet, which trashed the stove. Later came use of a special platter for cooking in the microwave, which trashes the micro and the difficult-to-clean up platter and takes a long time in small batches. At my daughter’s suggestion, we tried the oven, which cooked it just right, but trashed the oven. So finally the little light bulb went off, and I realized I owned an oven that was already greasy – my gas grill. So I bought three pounds of good country cured bacon from Benton’s - https://bentonshams.com/order/index.php - wrapped a couple of jelly roll pans in foil, added racks, and commenced to cooking. After a couple of try’s, I settled on heating the grill up with all burners on high and adjusted to hold at 350* on the lid thermometer, added the bacon, and closed the lid. Since my grill runs hotter in the back, I turned the pans around after 6 minutes. For pretty thin cut bacon, cook time was about 12 minutes and it turned out just the way I like it.

A pan ready for the grill 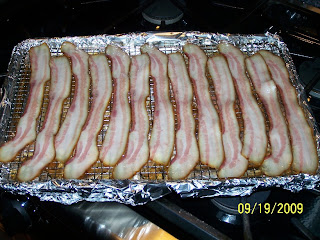 The third pan cooking - I did two pans the first round 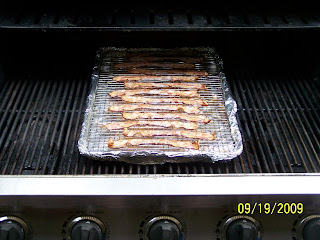 The first two finished pans - just a little too done 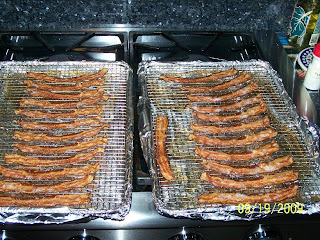 Ready for a little grease blotting 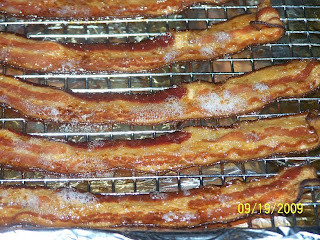 The finished batch, ready for the frig. Then it's just a few seconds in a paper towel in the microwave and serve up with my favorite meal - bacon and almost anything. 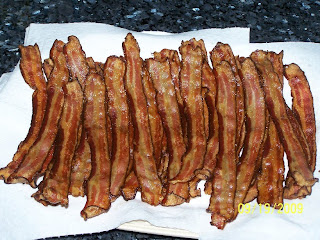 When finished, I just put the racks in the dish washer, let the grease harden, rolled up the foil and tossed in the trash – and the grill looked just like it did when I started.

I used the grill, as this bacon was already smoked, but next time I believe I’ll buy regular bacon, run the temp up in the smoker when I get done queing and try it that way.

As an aside, remember when your were young and very flexible. This is the way I found my granddaughter when I got up Thursday morning. It hurts just looking at the picture. 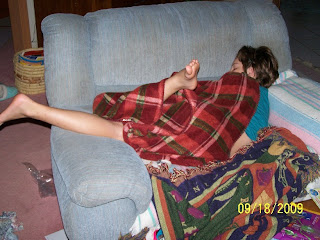