I had pre-written this post this afternoon in anticipation of a great meal. It went like this:

If I were a dog, I’d be referred to as a mongrel, such is the lack of purity in my bloodline. I’m a mixture of Irish, English, Dutch, American Indian and who knows what else. As a result, I’m confident there must be some German in there somewhere which might help explain my love of pork, potatoes, bread and good bier. Being as this is the case, I think there is a sufficient enough reason to celebrate Oktoberfest with a German meal. So for dinner tonight it was jagerschnitzel, German potato salad and caraway kraut using recipes from Allrecipes http://allrecipes.com/Recipes/Holidays-and-Events/Events-and-Gatherings/Oktoberfest/Top.aspx.

The last time whole boneless pork loins were on sale, I bought one and cut some thick chops for grilling and some thin ones for cutlets which were used today. I pounded them out to ¼ in thickness, breaded and fried. Made up the potato salad per the recipe using potatoes, onion and parsley from the garden – added a few slices of crumbled bacon to it. The kraut was store bought with some caraway seeds already added. I’ve made kraut over the years and have yet to make any I like as well as what come in bags from the store cooler (except this). We even bought some from Ohio Amish country during a visit a few years ago and I still like the store bought better.

Here’s a pic of my plate 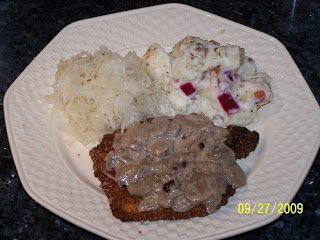 I would have washed it down with some German beer but since I didn’t decide until today to cook this and thanks to local Blue Laws, the lack of stores in the greater metropolitan middle of nowhere I live in, and my unwillingness to use the gas to drive 20 miles, I did the best I could. I could have drank Budweiser since it was founded by two Germans, but I settled on Sierra Nevada Pale Ale as it at least taste a little European.

We topped it all off with some semi homemade black forest cake.

I really hoped to report on a great meal, but frankly the beer was good, the cake was pretty good, and I’ll never make any of the other recipes again. Oh well, such is life on the food journey.
Posted by Big Dude at 8:17 PM