My home town of Fairmont, WV can lay claim to be the inventor of the pepperoni roll and they are in fact delicious, especially when spit open and dressed with pizza or hot dog sauce, peppers and cheese. Growing up there, I also operated under the misconception that, in addition to the rolls, they provided the one true hot dog – or at least the true West Virginia hot dog – maybe because there has to be more mom and pop hot dog shops per capita than anywhere else on the planet. In that area it’s all about the sauce (called chili in other parts of the world) and the recipe is guarded as though it were the crown jewels. The classic dog when ordered with everything will be a boiled wiener on a steamed bun and have sauce (which is usually somewhat thin), mustard and onion with a very few places serving slaw on request. Come to find out, there are just a few counties in Northern WV that serve them this way and the true WV hot dog has slaw as standard - I was shocked when I learned this just a few years ago.

Having said all this, you can imagine my reaction when I moved to Tennessee, ordered my first hotdog with everything and received a dog with mustard, onion, canned Hormel chili, and slaw – I guess it could have been worse had a little ketchup been added. I’ve since learned, thanks to Food TV, that German immigrant Charles Feltman on Coney Island is regarded as the hot dog inventor, not someone in Fairmont, and a Chicago Dog doesn’t even have sauce – shocked again.

Since hotdogs are one of my favorite foods (like Ben Matlock), I took my East Tennessee born wife to Fairmont early in our marriage and introduced to her pepperoni rolls and a good hotdog, after which she used several recipes and to create an excellent hot dog sauce (recipe secret of course). She makes it in big batches and freezes in pint containers. I like it on burgers, pepperoni rolls (which she also makes), and off course dogs – sometimes just sauce, mustard and onion – no wiener. I still eat mine like I was learnt to do but she likes to jazz hers up with other stuff. Here’s a couple pics of Monday night's dinner. Would have sided it with something, but what could possibly be better than another hotdog.

The grilled wienners with a little carmelization as they say on TV. 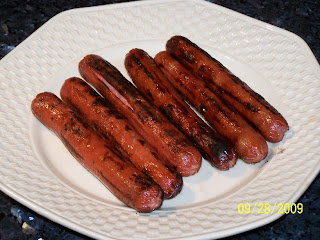 My dog sided with another 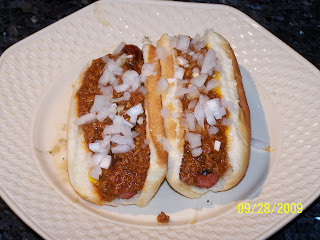 Beverly's first one topped with cheddar. 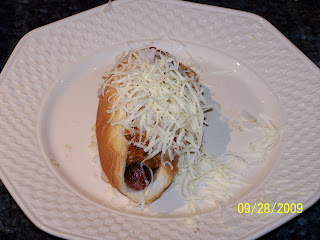 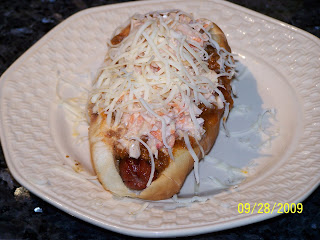 I cooked an extra for the pets, but the first two went down so easy, I had a third one for dessert. It's hard to beat a good dog.
Posted by Big Dude at 1:48 PM