I saw this recipe on Swibirun’s blog http://www.nibblemethis.com from Sept 3 and have really been wanting to try it. Since Beverly took Alex to the orthodontist this afternoon, she put me in charge of dinner, so today it is Italian Sausage Fettucine ala Alexis ( also our granddaughters name who goes by Alex). I pretty well followed the recipe as she made it (with her modifications) but used a clove of minced garlic rather than garlic powder. Since I didn’t want to clean two skillets, I cooked the meat, onion, herb concoction in a skillet then put it aside and used the same pan for the sauce – later decided it was good to pick up the extra flavors that were left in the pan – but may have made the sauce a little more brown. We thought it was a home run recipe and will definitely cook it again – way to go Alexis. 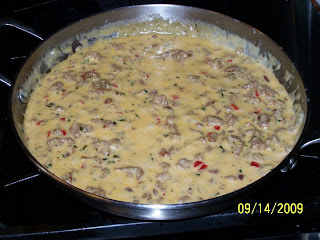 The dish on the platter 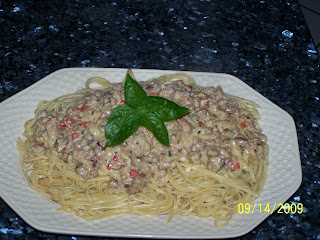 We mixed all the sauce and pasta, then plated and topped with parmesan (obviously pre grated) 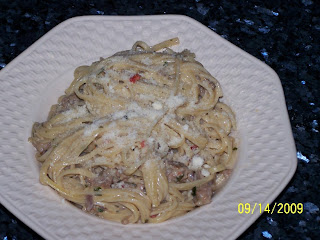 After thinking about it, I figure this dish must be from Southern Italy – what could be more southern than sausage gravy over starch.
Posted by Big Dude at 7:02 PM