I was in the mood for fish tonight, and remembered we had some sockeye salmon in the freezer from our neighbor’s last Alaskan fishing trip and a piece from the store. We also had a couple of cedar blanks that have been taking up space in the pantry for a while. Since we haven’t had it in quite awhile, it seems like a perfect match and a great taste test opportunity. I soaked the planks for about 6 hours. I mixed up some sour cream, Dijon mustard and dill weed and brushed it on the filets pretty heavily. I had heated the planks over high direct heat until they were smoking, then flipped them over, brushed with olive oil and added the salmon. Put them back on the grill over low direct heat for about 30 minutes. I forgot the lemon slices that I’m sure would have added to the flavor - good thing I have a day job.
I grew sweet potatoes this year and ended up with several footballs – I think because I grow in heavy clay, they grow together. They’re too big to bake but work well this way. 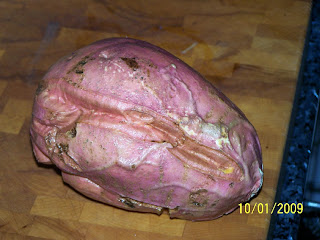 I cut them into slices and steamed then until just tender then used the following Bobby Flay recipe:
Ingredients
· 3 sweet potatoes, cooked through, cut into wedges
· Canola oil, for brushing
· 1 tablespoon Bobby Flay poultry rub (I used Billy Bones Original)
· Kosher salt and black pepper
· 1/4 cup maple syrup
· 2 to 3 tablespoons Dijon mustard
Directions
Brush the potato wedges with oil and season with rub, salt and pepper. Grill, turning once, until nicely marked. Whisk the syrup with the mustard. Brush the potatoes with the glaze and turn a few times to caramelize.

Here's a pic of the salmon with the sour cream mixture 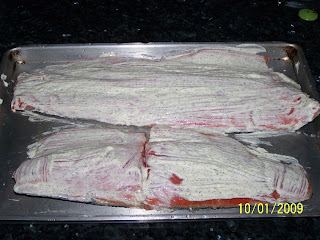 The salmon on the planks 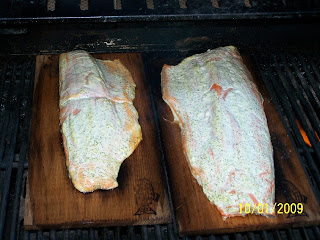 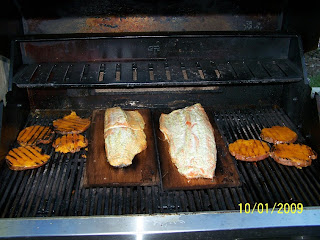 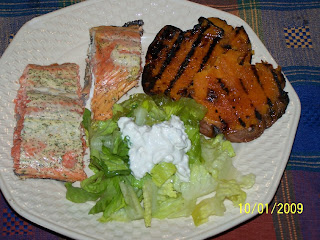 I really liked the salad with Chez’s blue cheese dressing, and the sweet potatoes. I overcooked the salmon a little and the topping didn’t provide as much flavor as I’d hoped. The caught-in-Alaska fish had more flavor than the store bought even though is was also wild caught sockeye salmon. Bev, who likes her fish to taste like chicken, preferred the store bought one. I sure would like to be able to cook great grilled salmon but have yet to hit on the right recipe.
Posted by Big Dude at 7:07 PM