As I mentioned yesterday, Rhett had requested BBQ during his visit with us and how could I say no, besides I kind of like it myself. While a big favorite to many, pork ribs are about third on our list but high on Rhett’s and cooking them provided a taste test opportunity. We also cooked some beef ribs per the method recently posted by Chris over at Nibble Me This. His looked great and I’ve yet to make any I liked, so I was very optimistic. I’d also decided to smoke some farm raised (all I could get) steelhead trout and salmon for another taste test, but after a diligent search of the freezer, I discovered the source or the terrible odor we’d had in our garage for the past few days – 10 day old fish in a bag atop the freezer (I thought it had been a dead mouse smell). New strategy – always set things on the floor, where they must be tripped over, and never atop the freezer, where CRS can result in throwing away food – which I hate to do.

Since buying the book, I’ve wanted to try Mike Mill’s pork rib recipe as published in “Peace, Love and Barbecue” and compare it to my normal method. If your not a follower of BBQ, Mike is a 4 time winner of Memphis In May World BBQ Championship and a winner of the Jack Daniels World Invitational Championship and is affectionately referred to as The Legend. He is now a highly successful restaurant owner. So the first thing was to make up a recipe of Magic Dust (his rub) and his Apple City BBQ Sauce, which I did the day before. I believe this is the mildest BBQ sauce I’ve had, so I was confident it is designed to complement the rub, which had a obvious cumin flavor.

I put the same amount of rub on each slab with mine having a mixture of Billy Bones Competition and XXX Cherry rubs. I cooked them on the same rack in the smoker at 225* to the same level of doneness, requiring about 5 ½ hours. I sprayed with apple juice 3 times while cooking. Fifteen minutes before removing, I gave each a coat of BBQ sauce – Tennessee River Cranberry Delight for mine, and upon removal I gave Mills’ a sprinkle of Magic Dust. His method called for another coat of his sauce here as well, but I wanted to be able to taste the pork. Here are the finished ribs – mine are glossier as the sprinkling of Magic Dust muted his. 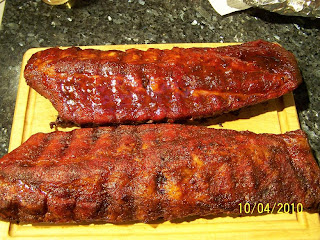 Since I was cooking the ribs in the Stumps Smoker at 225* and wanted to use Chris’ recipe for the beef ribs, requiring 325*, I fired up the Klose offset for the first time in 1 ½ years and cooked with split hickory. It’s been so long, and it took me a little while to get the temps doing what I wanted – I had them too hot then too cool, but I had allowed myself a couple of hours of heat up time before adding the ribs. The Klose really wants to run at 250*, so it took a little more effort to keep it around 325* and I ran a little low for the first part of the cook, so I went 1 ½ hours before wrapping. Otherwise, I followed Chris’ recipe as close as I could. 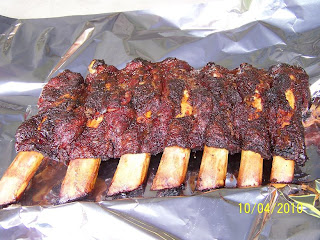 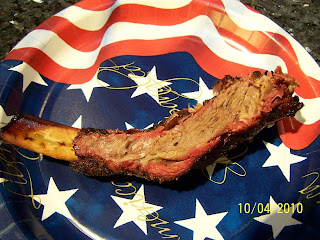 They got done early so we had them as an appetizer and they were, by far, the best beef ribs I’ve ever cooked and would rival those I’ve had at BBQ joints in Texas. Thanks Chris for posting the great how-to video.  I'll be cooking a slab for a friend my next BBQ day.

We sided the meat with some slaw, basic mac & cheese (remember my comment about the kids food desires from yesterday), and Bevs sis brought some fresh corn she’d picked up from a roadside stand – is that a typical BBQ meal or what. 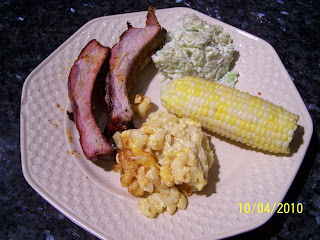 And now for the rib verdict. First, I’ll say both were moist and tender with the meat almost pulling off the bone cleanly (or not done enough for Bev who likes hers to fall off the bone). The other general comment is that, even though they were sprayed three times with apple juice to moisten, the bark was a little dry-tough, so I’m going back to my normal 250* cooking temp so they’ll get done faster (less time to dry out).

The consensus was that they were both delicious and maybe too close to call. Tasted separately, I wasn’t sure how Mikes rub and sauce would turn out, but they worked very well together - guess thats why he's a champion. Rhett gave mine a slight edge – I think because he liked the cherry flavor that comes through. I was impressed when he said “yours have a fruitiness, cherry I think …” - I can rarely pick out individual flavors. I was so pleased that mine even got in the same universe with Mills’ much less were considered as good. I would encourage all you rib cookers out there to conduct a test of you own against his – considered some of the best around. As for me, I think I’ll stick with what I’ve been doing - since all my friends seem to like them that way.

And finally, it was a very nice visit with the grandkids and great fun to hang around the pits (even though it was a little cool out), have a few adult beverages, and visit with Rhett - life doesn't get much better.