We are still getting a little late fresh corn from the guys along the road and we had six ears to cook when up pops Southwestern Corn Chowder from Lea Ann over at Mangos, Chili and Z – check out her blog for the recipe and a great picture.
I read regularly where folks post a recipe and it says "adapted from ..." – this is a real example of this concept, although not by design.  We ended up with 4 cups of corn so decided to make a double recipe.  We had 4 cups of rich turkey broth to which we added 2 cups of water for the needed 6 cups.  We had no fresh chiles and as it turns out only 2 small cans of diced green chiles, so I supplemented with some fresh bell and and a couple of jalapeno peppers - put them in the pot at the same time as the onion and celery.  We had no fresh thyme so I used 1/3 the amount of dried.  Other than these few minor alterations, I followed the recipe :-).
After ladling into the bowl, we decided it needed to be creamier and added another dollop of sour cream.  One of the learning’s is that the final flavor is very much affected by the green onion and, especially, the cilantro garnish and these can be used to alter the flavor quite a bit.  Here’s a shot but Lea Ann’s is much better. 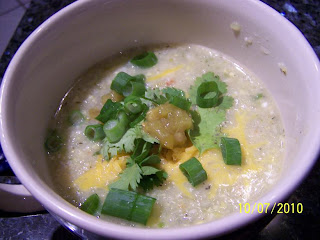 In summary, Bev and I thought it was delicious and we were glad we made a double recipe - I ate two bowls.  I didn’t blend it a lot, per the recipe, and liked the mild crunchiness this provided.  If our bastardized version was this good, I can only imagine how good Lea Ann’s original was.  Thanks for the recipe L.A.
Have a great day and thanks for stopping by.
Larry
Posted by Big Dude at 6:27 AM