Beef Bones Into Dinner, Broth, And Suet and A Big Oops

I had several packages of beef belly and short ribs and a roast in the freezer that I needed to do something with. I decided to trim up and use the meaty ones as short ribs and cook the others into beef broth for the freezer and fat for making into suet for our bird friends. This is the starting pile on a full sized jelly roll pan. 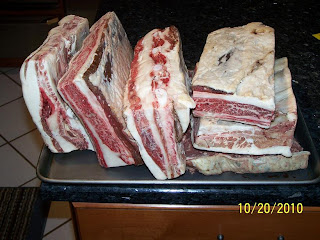 And these are the ones I’ll use in a dish later. 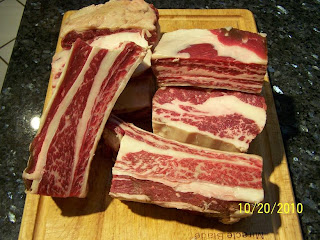 I simmered them for about 24 hours in my 16 & 8 quart pots, which were both nearly full. After removing the big solids, I let it cool so I could just spoon off the fat, then strain the broth and freeze in quart bags made 6 quarts. I think we should have enough beef and poultry broth for the coming soup season.  I also got a fair amount of boiled beef for us if it has any taste left or for the pups if it doesn't.

On Oct. 24, I’d mentioned making the shrimp remoulade while Bev was gone and I made another meal she’s not crazy about - venison. While freezer arranging the other day, I found a package of deer sausage and decided to use part of it for a breakfast sandwich. I fried it in a little olive oil and topped with sharp cheddar after flipping and meanwhile toasted the bun on the inside and hard-fried an egg. I know many folks would beat up the egg in a bowl then fry for a sandwich, but I do it like Mom and just broke the yolk with the eggshell when I put it in the pan. The sausage had just a little heat and it made for a delicious sandwich. 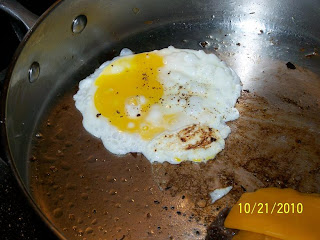 Next you're probably expecting a shot of the finished sandwich. BUT. Our kitchen cabinets are equipped with knobs on the upper drawers and more than once the strap has caught on one as I picked up the camera. As a result, the camera is jerked from my hand and lands on the floor and the last time it happened, I told myself I've got to be more careful. It occurred again this morning as I was about to shoot the sandwich, except this time I may have killed it – don’t know if it’s easily fixable or if I’m about to go camera shopping. Fortunately I had a few posts in the que and I’ll see what I can do with Bev’s camera now that she's home from Florida - I feel a little lost without mine. As for this sandwich, try to picture in your mind how good it looked as I described it above and as for the camera, oops is not exactly what I said.

We sure had interesting weather here yesterday.  If I looked out the window it seemed like a fall day -breezey and lots of leaves in the air, but when I walked out, the 84* temps felt like summer, so my senses were very confused.  This was all a forerunner to the spring like thunderstorms and tornado watches that came along in the evening and the all night hard rain - got over 4 inches.