A while back, I saw a TV ad for their Crabfest at Red Lobster and after going to Lobsterfest, I knew not to make that mistake again. As a side note, my dad and his wife lived in the Bradenton, Fl and with many seafood restaurants in the area, one of their favorites was Red Lobster – go figure. Anyhow, while I wasn’t about to trot off to Red Lobster, the crab fest idea stuck with me, so I decided to cook my own. I’ve posted before that, at best, I cook mediocre seafood and one of my goals is to get it into the very good realm, so I saw this as a good practice opportunity.

The three dishes that stuck in my mind were steamed king crab, pan-fried crab cakes, and crab-stuffed shrimp. The first one was pretty simple, thaw and steam the crab legs, except I added one of my frozen shrimp stock cubes to the water for some extra flavor.

While I could have used the same crab recipe for the cakes and the shrimp, I saw this as an opportunity to try two different recipes for the price of one meal. Since there were just three of us, I made half of the stuffed shrimp and three fourths of the crab cake recipe – which fit for the one pound of crab that I had. I used the $8/lb deluxe backfin crab verses the $18/lb lump – sometimes I’m a little cheap, but it was in big enough chunks to make dandy cakes.

For the crab cakes, I used Cathy’s recipe for Fire Roasted Pepper Crab Cakes from Wives With Knives. Check out her blog for the recipe and pics. I made it as Kathy wrote it and the ¾ recipe made six 3/8 of a cup sized cakes.

And for the stuffed shrimp, I used Mary’s recipe for Crab Stuffed Shrimp  from Deep South Dish. Again, check out her site for the recipe and pics. I used  twelve 15 count shrimp we had in the freezer and they were a great size for stuffing and matched just right with the stuffing amount. The only problem was they were pre-cleaned and in most cases cut too deeply for me to stuff them from the bottom as I wanted, so they didn’t have the presentation I wanted. My solution was to put them on a raised rack in hopes they would not fall over as they cooked – it worked well as they stayed stuffing side up. 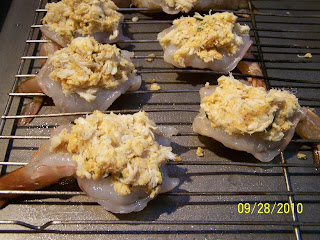 We considered several side dishes, but wanted to leave maximum stomach room for seafood, and since we had lots of tomatoes and a piece of baguette, we settled on bruschetta. Bev just toasted the bread and put everything in the topping which contained tomatoes, garlic, olive oil, salt and pepper, then sprinkled on a little chopped basil, parsley and shredded Romano cheese. She did this first class like she does pizza, salads, and sandwiches and loads them up.  Here's my plate. 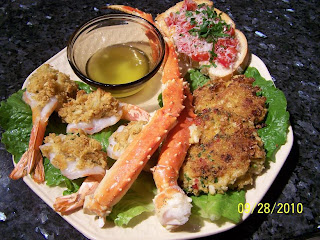 The meal was close to very good – the shrimp stock cube had a positive impact on the crab legs, the crab cakes and stuffed shrimp were outstanding as was the bruschetta. I'll definitely use these two crab recipes again. I decided to work on presentation a little and just the addition of a couple of lettuce leaves made a big difference. The only negative was I used big shrimp and they could have cooked longer – especially for Bev who likes hers DONE (daughter Wende and I scarfed ours up).  One thing I believe I can say with confidence – it was better than Red Lobster.

For you football watchers, how bout them Vols - they found a way to snatch defeat from the jaws of victory by not being able to line up 11 players on the field - at least they gave LSU more than they wanted for the whole game.